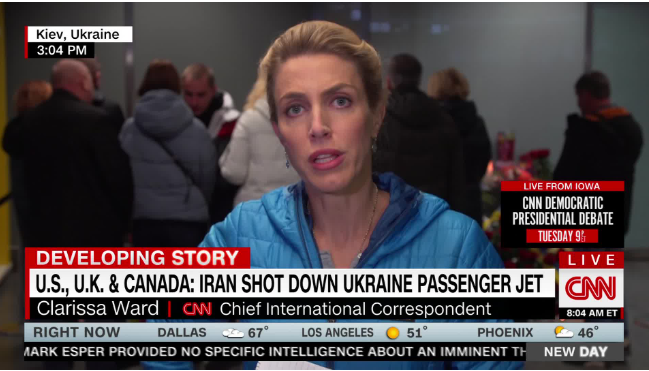 CNN’s chief international correspondent Clarissa Ward has traveled the globe for years, reporting from various global hotspots for CNN since 2015, as well as CBS News and ABC News before that. But these past 7 days have been unique, even for the Peabody Award-winning foreign correspondent.

Ward has gone from country to country to cover each development of the U.S.-Iran crisis over these past 7 days. Starting last Friday, Ward reported from West Palm Beach following the U.S. targeted killing of Iranian general Qasem Soleimani.

After that, she covered Iran’s retaliation from Bardarash in Northern Iraq, where she reported live from the site where one of the Iranian missiles landed.

And now she’s in Kyiv, Ukraine as the investigation into the Ukrainian jetliner crash in Tehran heats up; a crash which killed 176 passengers, including a significant number of Canadians. Canadian PM Justin Trudeau said 138 of the passengers were bound for Canada. In addition to teenagers, children and college students, the flight reportedly also included a family of 4 and newlyweds, too.

Ward will be reporting from Kyiv for the foreseeable future.

As the investigation into the Iran plane crash continues, Iranian officials say it could take one or two months to extract data from the black boxes. @fpleitgenCNN and @clarissaward report on the latest. https://t.co/XSnQAHMZcn pic.twitter.com/is8VKtplcP

Ward also just wrapped an interview with Ukrainian foreign minister Vadym Prystaiko, who said the intelligence passed from the U.S. and UK is “very solid.”

Below, is video of her reporting for CNN Newsroom with Brooke Baldwin, where she speaks about her interview with the foreign minister.

It’s almost midnight in Kyiv, which means Ward might want to get some shuteye, because if the past 7 days are any indication, she’ll be taking her talents to multiple countries next week.