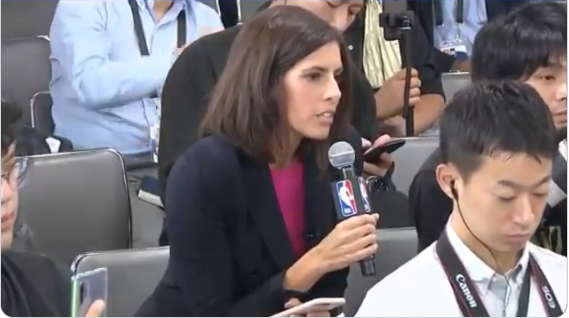 The NBA is apparently tired of having to answer questions about the league’s issues with China, although this time it went too far.

Macfarlane started to ask the players a question about the league’s deteriorating relationship with the nation. However, before Macfarlane could finish her question, a spokesperson offstage spoke out, saying the players would only be answering basketball-related questions.

Her mic was then taken away.

Watch the moment CNN’s Christina Macfarlane was quickly shut down by the Houston Rocket’s media officer as she tried to ask a question about the NBA’s ongoing standoff with China.

The move seemed odd considering NBA commissioner Adam Silver has publicly stated that his players can speak out about issues that matter to them, and not feel censored.

At first, it was assumed this media relations rep was from the NBA league office. But a tweet from USA Today sports reporter Jeff Zillgitt said otherwise.

By the way, it was not an NBA spokesperson from the league office in New York who shut down this question.

According to CNN, it was a Houston Rockets’ media relations employee who yelled out at Macfarlane. The employee said the reason Harden and Westbrook did not answer was because they had answered the question several times already.

Earlier, Macfarlane would successfully able to ask Rockets’ coach Mike D’Antoni if he had a message for Chinese fans who might have felt let down by the NBA over the spat. “It’s a tough situation, very difficult. Adam Silver speaks for the NBA, I work for the NBA, I go with Adam. Commissioner Silver will do the right thing,” D’Antoni said.

To those who haven’t quite kept up with the story: The Houston Rockets are playing exhibition games in Asia right now. General manager Daryl Morey sent out a seemingly innocuous tweet sending support to pro-democracy protestors in Hong Kong. The Chinese government was furious about the tweet. Morey ended up having to apologize and the league was slow to defend him; a move that was swiftly condemned here in the U.S.

Morey took the tweet down and Silver decided not to suspend or fine Morey or the Rockets organization, despite being slow to support him. As a result, Chinese state-run TV has now pulled Rockets games, and canceled events.

Basketball is MASSIVE in China (and throughout Asia).

The NBA later apologized to the London-based Macfarlane: