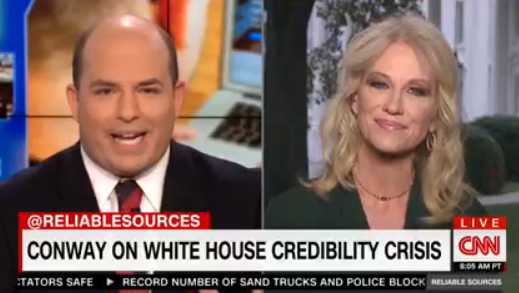 CNN and the Trump administration are at it again.

White House counselor and cable news mainstay Kellyanne Conway appeared on CNN’s Reliable Sources this past weekend (much to the chagrin of some in the Twittersphere), and got in a spat with host Brian Stelter over his network’s coverage of the Trump administration.

Stelter asked Conway about a new poll showing Pres. Trump’s approval rating at a historic low for a president nine months into his term, and what the White House planned to do about what he deemed a “credibility crisis.”

Conway didn’t buy the Washington Post-ABC News poll Stelter was citing, and criticized CNN (as she has been known to do over the years), saying the network has refused to cover policy and “the economic boon” under the Trump presidency.

“You have the voice going through your promos saying CNN, ‘the most trusted name in news,’ what evidence do you have of that?,” Conway said. “I’ve seen polling numbers to the contrary on that.”

Conway continued,”CNN used to be a place where people can tune in and get the news all day long. Now they get spin and people’s opinion. And I think CNN should own it.”

Stelter defended his network, telling Conway she and the sitting administration apparently “doesn’t want an adversarial media.” He continued, “I guess you just want everybody to be like Fox News, state-run media.”

“Obviously Fox News is…” Zucker said during an April interview with New Yorker editor David Remnick.“So, look, there’s three cable news networks. Certainly in prime time and in the morning Fox News is state-run TV and is extolling the line out of the White House.”

Conway decided to defend Fox News, going the ratings route in doing so.

“Stop being so jealous of Fox News, Brian, and their ratings,” Conway responded. “It would help if you drop the jealousy a little bit about Fox News.”

It’s unknown if Stelter is in fact jealous of Fox News, but she’s right about them in the ratings department.

Fox News has been the No. 1 cable news network in total viewers for 190 consecutive months.