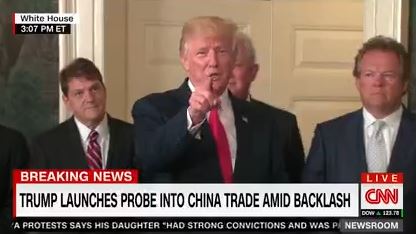 Pres. Trump held his second live appearance before news cameras today, and it got contentious at the end when CNN’s Jim Acosta asked the president a question.

First, for background, the event was an announcement and executive order on trade with China. But after the signing, several members of the press asked questions, including Acosta. Here’s the back and forth:

Acosta: Mr. President, can you explain why you did not condemn the hate groups by name over the weekend?

Acosta: Can we ask more questions?

Trump: It doesn’t bother me at all. But I like real news, not fake news. You’re fake news. Thank you. Thank you everybody. (walks away)

Acosta: Haven’t you spread a lot of fake news yourself, sir?

When a reporter asks why Pres. Trump didn't condemn white supremacists this weekend, he says "they've been condemned." pic.twitter.com/LMaWVQwRBW