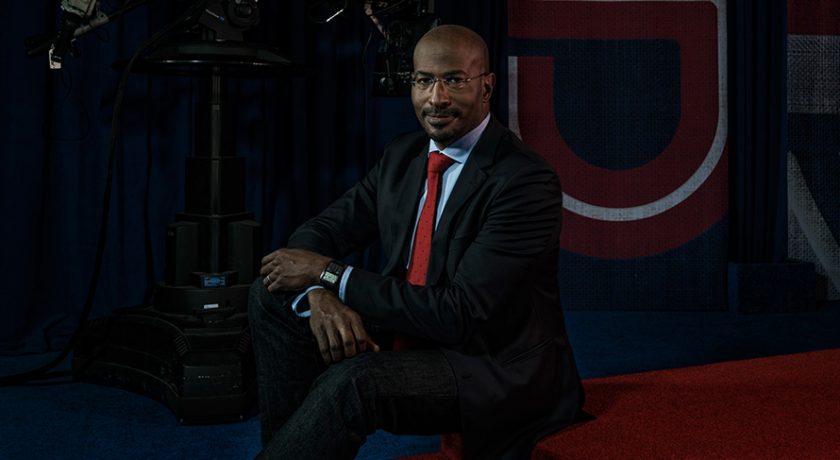 CNN political commentator Van Jones helped create the Trump administration’s police reform executive order, according to The Daily Beast’s Lloyd Grove, and he did not disclose to the CNN audience that he had actually attended secret White House meetings with President Trump’s senior adviser and son-in-law Jared Kushner, discussing ways to frame the presidential project.

From The Daily Beast:

According to a knowledgeable White House source, who expressed satisfaction that there were zero leaks, Jones and California human rights attorney Jessica Jackson, who runs #cut50, a prison-reform group that Jones also founded, actively participated with law enforcement officials and White House staffers to help fashion the order and guide the politics of the discussion to what they considered “the sweet spot” between law enforcement and “the reasonable middle” and “the reasonable left.”

Jones would go on to praise the bill he helped create on various shows across the network, including Anderson Cooper 360 and Inside Politics with John King.

“I think it’s pushing in the right direction,” Jones told Cooper, without disclosing his role in creating it. “What you got today is, I think, a sign that we are winning,” he added. “Donald Trump has put himself on record saying we need to reform the police department. … We are winning! Donald Trump had no plan a month ago to work on this issue at all. The fact that we are now in the direction of moving forward, I think, is good.”

Earlier in the day, he told King, also without disclosing his role in the matter: “The executive order is a good thing, mainly because you saw the support of law enforcement there. … There is movement in the direction of a database for bad cops,” said Jones. “We have never had a federal database for bad cops. That’s why all these cops go all over the place doing bad stuff. … The chokeholds, that’s common ground now between Nancy Pelosi and Trump. Good stuff there.”

Little did we know Jones was touting something he helped create.

CNN wouldn’t comment on why it never disclosed Jones’ role in the framing of this executive order.

Jones is a progressive commentator and activist who briefly worked in the Obama administration in 2009 as a green jobs adviser, and moved to CNN later. He was a co-host on the short-lived fall 2013 reboot of Crossfire, but really became a star on the network for his commentary leading up to the 2016 presidential election.

Despite his liberal views, and his issues with right-wing media (see Jones vs. Glenn Beck), Jones has sporadically tried to reach out to the other side. Shortly after the 2016 election, Jones hosted a series of specials for CNN, The Messy Truth, where he took the pulse of some of the 65+ million people who didn’t vote for Trump and many of those who did.

He even appeared on a cover of Adweek in April 2017, and was the focus of the cover story: “Can CNN’s Van Jones Bridge America’s Rancorous Divide and Spark a Productive Political Conversation?”

In addition to his commentary for the network, Jones hosted a bimonthly Saturday evening The Van Jones Show, which ran for 43 episodes, launching in January 2018. He interviewed newsmakers and pop culture celebrities for the program. Jay-Z, whose Roc Nation Entertainment represents Jones in the TV newser’s media work, was interviewed by Jones for one episode.