NEXT:Rachel Maddow Will Quarantine After Having Had a Close Contact Test Positive For Covid-19
PREVIOUS:Broadcast Networks to Present Prime Time Coverage of President-Elect Joe Biden's Address to America 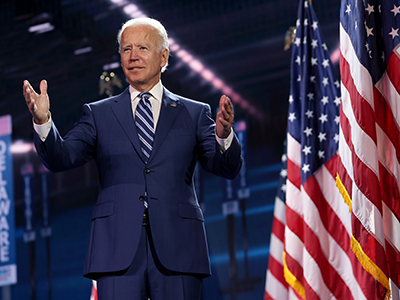 CNN is the first network to project Joe Biden has been elected the 46th President of the United States, doing so on Saturday, Nov. 7 at 11:24:20 a.m. ET.

The network said, both on-air and online, that it was able to make the projection because Biden won Pennsylvania and its 20 electoral votes, putting him at 273, which is 3 more than is needed to become president-elect.

After four long tense days, we’ve reached a historic moment in this election. We can now project the winner of the presidential race. CNN projects Joesph R. Biden Jr. is elected the 46th President of the United States, winning the White House and denying President Trump a second term.

We’re able to make this projection because CNN projects Biden wins Pennsylvania. The former vice president, in his third run for the highest office, pulling off a rare defeat of the sitting commander in chief. With this victory, Kamala Harris is set to become the first woman and the first person of color to be the vice president.

The historic moment when @CNN projected the winner. pic.twitter.com/Op4GwCChdE

Lester Holt: “The moment the entire country has been waiting for, after a very close race, NBC News now projects that Joe Biden has won the Keystone State, Pennsylvania and its 20 electoral votes. And that means we have now project that former vice president Joe Biden has been elected President of the United States. He is president-elect, Joseph Robinette Biden at 77 years old.

Norah O’Donnell: “CBS News projects Joe Biden has been elected the 46th President of the United States. The kid from Scranton becomes the next leader of the free world. The 77 year-old former Vice President now, the President-elect of the United States… We are watching history unfold at the end of what has been an extraordinary election week And now, the new President-elect, Joe Biden, faces what may be the biggest challenge of his public life, trying to unite a country that is deeply divided.”

BREAKING: Joe Biden is the apparent winner of the state of Pennsylvania; set to become the 46th President of the United States. https://t.co/GwwRl4EUb3 pic.twitter.com/SSOSU8Xh1g

The other networks still only have Biden at 273, not having called Arizona or Nevada as of publication time.

Fox News was the final major newser to project the race in Biden’s favor, making its call at 11:40 a.m. ET. As mentioned, the network’s Decision Desk projected he will win both Pennsylvania and Nevada, which puts him at 290, 20 electoral votes of the necessary 270.

The Fox News Decision Desk can now project that former Vice President @JoeBiden will win Pennsylvania and Nevada, putting him over the 270 electoral votes he needs to become the 46th President of the United States. #foxnews #Election2020 pic.twitter.com/H2UBDF2C9u

Bret Baier: “The Fox News decision desk can now project that former Vice President Joe Biden will win Pennsylvania and Nevada, putting him over the 270 electoral votes he needs to become the 46th president of the United States.”

Martha MacCallum: “Donald Trump, the 45th president of the United States, who stated in this process, ‘I will never give up fighting for you and our nation,’ will be denied a second term. That has not happened since 1992 and President George H.W. Bush. Keep in mind, the Trump campaign is in the midst of waging legal challenges in several states, but the path is clear for the new president elect.”

Baier: “The states will all need to officially certify the vote. In the middle of a pandemic, almost 150 million Americans voted, and Joe Biden and Kamala Harris will receive the most votes of any presidential ticket ever.”

MacCallum: “Senator Kamala Harris will be the first woman and the first woman of color to become vice president of the United States. President Trump garnered five and a half million more votes than he did in 2020 than he did in 2016 and closed the gap in the final days after barnstorming the nation. Whether he chooses to concede or decides to wait until these legal challenges play out is yet to be seen.” 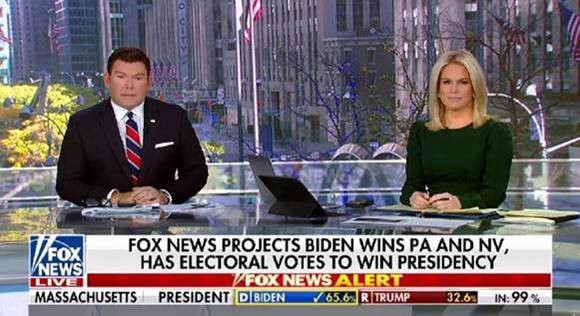 What a moment in history. We have all been waiting on the edges of our seats since Tuesday. It is the end of a tumultuous presidency, a time of some accomplishments, no question, a time where many Americans throughout the country and in shuttered steel towns and rural America, they felt for the first time, they felt heard, which is important.

But it is also, Wolf, it has also been a time of extreme divisions. Many of the divisions caused and exacerbated by president trump himself. It’s been a time of several significant and utterly avoidable failures, Most tragically, of course, the unwillingness to respect facts and science and do everything that can be done to save lives during a pandemic. It has been a time where truth and fact were treated with disdain. It was a time of cruelty where inhumanities such as child separation became the shameful policy of the united states. but now the trump presidency is coming to an end, to an end, with so many squandered opportunities and ruined potential, but also an era of just plain meanness. It must be said to paraphrase President Ford, for tens of millions of our fellow Americans, their long national nightmare is over.