NEXT:Here are the Executives Who Will Lead Fox Weather
PREVIOUS:Chris Cuomo Helped Advise Gov. Andrew Cuomo on How to Respond to Sexual Harassment Allegations 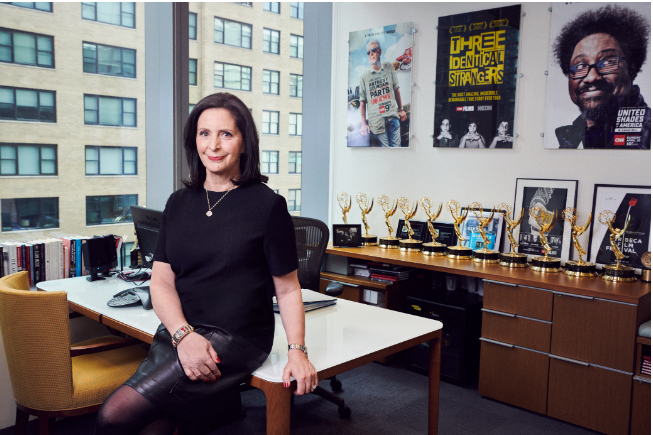 Stanley Tucci was among the featured talent to speak on behalf of CNN at WarnerMedia’s upfront presentation on Wednesday—and understandably so.

Not only did Season 1 of CNN’s newest travel food series Stanley Tucci: Searching for Italy receive rave reviews, but it also finished its inaugural run in the first quarter of 2021 as one of cable news’ top-rated series in weekend prime time. CNN renewed Searching for Italy for a second season after only its second episode.

According to Amy Entelis—CNN evp for talent and content development and the executive in charge of CNN Original Series and CNN Films—shows like Searching for Italy are in lockstep with the mission for the network’s original programming.

“One of the things that we’ve been really focused on at CNN Original Series is looking back in history, but also bringing it forward and connecting the dots with what people are experiencing right now,” said Entelis.

We spoke with Entelis after the upfront about upcoming CNN Originals, how the just-announced Discovery-WarnerMedia merger could impact that slate and changes in the television news business, going back to her long, successful run at ABC News.

TVNewser: Why do you think Searching for Italy has resonated so strongly with audiences, and did you expect this response and these numbers going in?

Entelis: We were cautiously optimistic. As you know, it had been a while since we had original food and travel programming on CNN, and launching it, shooting it in the middle of a pandemic obviously has some risks associated with it. Hats off to Stanley: he connects with audiences in a way that I think they found very genuine, and he understood what would make that connection, and what the universality is around Italian food and Italian culture and history. He just did it brilliantly. I think the timing was also really fortuitous. By the time we aired it, people had become used to the pandemic; there was a little bit more of a sense of optimism around a vaccine, certainly in the U.S. Things were still difficult in February, but I think there was hope that the vaccine would change people’s fortunes.

Most importantly, this sort of hunger for travel and human connections was what everybody needed and wanted at that point, of course, with a little escape, as well. That show really gave them all of those things. It surpassed our expectations, mainly because we were concerned about the timing and the kind of mood of the country when we released it. We all felt confident in the show, we just weren’t sure about the timing.

There were a lot of announcements made at Wednesday’s upfront. What are a few CNN Original Series you’re especially excited about?

We’re especially excited about Patagonia, because it’s our first try doing something in the natural history space. We have done a lot of history and pop culture and host-led shows, and those have really resonated with our audiences, but we’re always looking to kind of expand and stretch our wings a bit. This was a very ambitious show, once again, shot in the middle of the pandemic, right in South America, and we spent we spent a year there with using mostly local crews. We think we have something really magnificent to show the audience. We have incredible, wondrous cinematography and pictures of animals in their natural environments. We also tell stories of the people who live in that incredibly vast country, and how they play such a significant role in the whole environment of Patagonia. So that’s a new thing for us. There was ambitious, and other people do it exceedingly well. You may think we were kind of nuts to go into that space, but we do think it’s something that the CNN audience would really connect to as well. So we’re very, very excited about that.

We’re also excited about another host-led show called Nomad with Carlton McCoy. Carlton is a is a master sommelier, but he’s not going to do a show about wine. He’s really going to do a show about food, culture, the things that make us unique as a country, that he respects he’s passionate about, which could include music and fashion, as well as food and wine. He’s going to go on that journey that we know audiences love to go on. He’s a new face and a new personality, we are very inspired by him and we’re very excited to be working with him.

Does Monday’s news about the WarnerMedia-Discovery deal at all change your mandate or your focus as you look forward to the next year?

We work very far in advance. We’ve just laid out today much of our slate for 2022, so nothing really changes for us in the next year. We think nonfiction, long-form premium programming has really earned its place on the CNN schedule. I think our viewers really have come to expect that from us. So, I think for the next year, and hopefully beyond, we will continue to be able to deliver these kinds of programs to our audience.

What’s changed in the news business since you were running talent going back to your ABC News days?

So, I’d say not much has changed. I think those are the things that matter the most of the audience. I think what’s changed, possibly, is the intensity of the news environment that we’re in right now. Relying on those journalists, at CNN and at other networks to really bring that news home to people in the most fact-filled and honest way possible, I think matters more than ever now; and so the people who are doing it have to really be up to the task.

I think that I’m lucky to work in an organization and in a profession where I think people are performing at that level.

I that the slate that we’re putting out in the world for CNN Films and CNN Original Series is both timely and entertaining. That’s something we think is truly important. For instance, we’re putting out a series about Jerusalem. The Jerusalem series has long been in the works, and I think it’ll be very, very important when it airs this summer to connect the dots for people.

We have a series about the life of Princess Diana, coming up on the 25th anniversary of her death. It allows people to look back in history and reflect. I think that’s been one of the things that we’ve been really focused on as soon at Original Series: looking back in history, but also bringing it forward and connecting the dots to what people are experiencing right now. We did that with the Lincoln series. We did that with a series we just did called The People V. The Clan. Looking forward, we’ll be doing that with Jerusalem and Diana. So, those are things that we think work well for CNN given that we are a news network, and this nonfiction has to fit into the narrative of what CNN does, but it also has to distinguish itself from the daily news. We walk that line, and I think some of the things coming up really demonstrate the value of that.