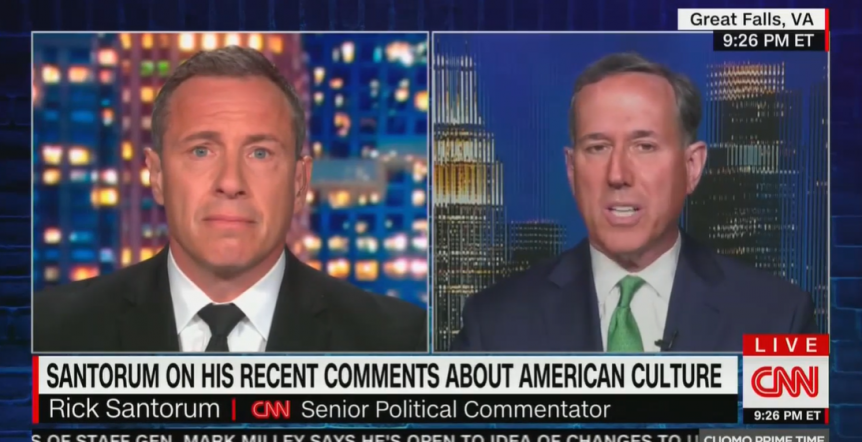 Santorum, a former Republican senator from Pennsylvania and two-time presidential candidate who joined CNN as a paid commentator in January 2017, sparked widespread anger back in April after claiming there was “nothing” in America before white colonizers arrived and that Native Americans haven’t contributed much to American culture.

The remarks that got Santorum booted from the network:

The decision to cut ties with Santorum reportedly came shortly after his May 3 appearance on Cuomo Primetime, where he attempted to explain his remarks:

A CNN senior executive told HuffPost, “Leadership wasn’t particularly satisfied with that appearance. None of the anchors wanted to book him. So he was essentially benched anyway.”

No stranger to cable news, Santorum spent four years as a Fox News contributor before the network terminated his contract in May 2011. He had been suspended by the network for 60 days in March 2011, as he had considered running in the 2012 Republican Presidential primary (which he eventually did).

Santorum also ran in the 2016 Republican Presidential primary, but obviously did not come out victorious that year either.