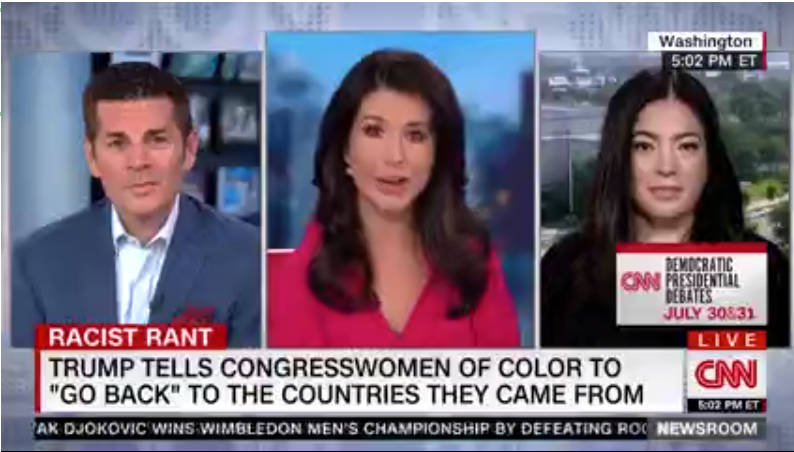 President Trump caused a firestorm yesterday by sending out racist tweets about four Democratic congresswomen, all of whom are minorities.

The quartet have been extremely critical of the administration’s immigration policies, and President Trump expressed the idea that if they have a problem, they “should go back and help fix the totally broken and crime infested places from which they came.”

….and viciously telling the people of the United States, the greatest and most powerful Nation on earth, how our government is to be run. Why don’t they go back and help fix the totally broken and crime infested places from which they came. Then come back and show us how….

Three of the four women–Alexandria Ocasio-Cortez, Rashida Tlaib, Ayanna Pressley– are U.S.-born, while the other Ilhan Omar moved to the U.S. at age 13.

While discussing the tweets yesterday, CNN Newsroom anchor Ana Cabrera, a Latina, said she has experienced her own fair share of racism over the years.

“As a woman of color, as a Latina, I have heard these kids of sentiments directed at me from being called a beaner by a northern Idaho farmer who asked where I was from when covering a wildfire in my first job as a young reporter, to the many hateful Tweets and messages I receive today from anonymous critics.

The words are coming from the President of the United States!”