NEXT:Morning Joe Was a Top 5 Cable News Program on Friday
PREVIOUS:Faced With Shutdown, Al Jazeera Journalists Make Their Own Demands 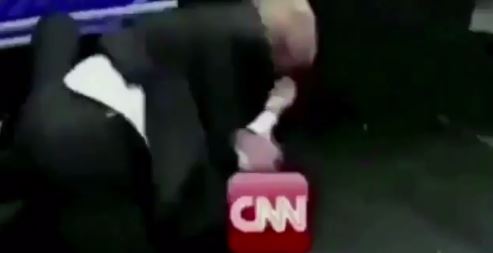 The Reddit user behind the infamous GIF of Pres. Trump body slamming a CNN logo covering the face of WWE founder Vince McMahon has apologized for his post.

“I was trolling and posting things to get a reaction from the subs on reddit and never meant any of the hateful things I said in those posts. I would never support any kind of violence or actions against others,” Reddit user “HanAssholeSolo” wrote in a post that started making the rounds across the Twittersphere after it was found by BuzzFeed reporter Brandon Wall.

Redditor HanAssholeSolo, the guy who posted the Trump/CNN clip the president tweeted, has apologized to @CNN, the media, and others pic.twitter.com/GlePoiSlFj

The user’s apology came after CNN KFile’s investigation into his identity, which KFile reporter Andrew Kaczynski has decided not to reveal.

“On Monday, KFile attempted to contact the man by email and phone but he did not respond. After posting his apology, ‘HanA**holeSolo’ called CNN’s KFile and confirmed his identity. In the interview, ‘HanA**holeSolo’ sounded nervous about his identity being revealed and asked to not be named out of fear for his personal safety and for the public embarrassment it would bring to him and his family. CNN is not publishing ‘HanA**holeSolo’s’ name because he is a private citizen who has issued an extensive statement of apology, showed his remorse by saying he has taken down all his offending posts, and because he said he is not going to repeat this ugly behavior on social media again.”

Kaczynski went on to write that CNN “reserves the right to publish his identity should any of that change,” a line which has set off right wing social media influencers and CNN critics who claim it amounts to a threat against the user.

Kazcynski claims the line has been misconstrued.

“It was intended only to mean we made no agreement with the man about his identity,” he later tweeted.

Energized by far right-wing social media influencers, conspiracy theorists and WikiLeaks’ Julian Assange, the hashtag #CNNBlackmail has been become the No. 1 trending topic this morning since the article documenting how CNN tracked down the Reddit user was published.

CNN’s @KFILE is extorting a private citizen, someone not famous, with threats of doxing. https://t.co/4l2RZEvWXb pic.twitter.com/ecyMwmgEFS

The history books will show that on #july4th2017 CNN blackmailed someone who made a joke gif about them. #CNNBlackmail

A multi-billion dollar TV network blackmailing a private citizen into not making funny videos about it is not journalism, CNN. #CNNBlackmail

Even Donald Trump Jr. has gotten in on the act.

So I guess they weren’t effective threatening the admin so they go after & bully a 15 y/o? Seems in line w their “standards” #CNNBlackmail https://t.co/u8YmNnLonj

Kaczynski responded to that particular tweet by saying: “Again. HanAssholeSolo is not 15 or anywhere close to it. This is POTUS’ son spreading misinformation.”

And according to the Washington Post, some in the deepest, darkest of corners across the internet have called for a very personal form of revenge against CNN, and Kaczynski specifically.