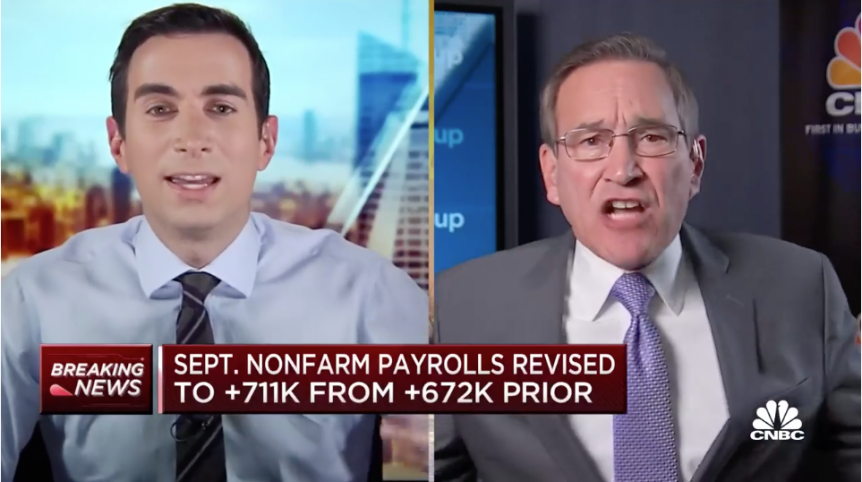 CNBC hosts Andrew Ross Sorkin and Rick Santelli had a heated on-air clash today as they discussed restrictions placed on restaurants and the service sector during the pandemic.

“You can’t tell me that shutting down, which is the easiest answer, is necessarily the only answer,” Santelli said.

Sorkin replied. “The difference between a big box retailer and a restaurant—or frankly even a church—are so different it’s unbelievable. …You’re required to wear a mask. It’s science. I’m sorry.”

That didn’t sit well with Santelli, who angrily shouted, “It’s not science. 500 people in a Lowe’s aren’t any safer than 150 people in a restaurant that holds 600. I don’t believe it.” He added that he lives in an area with a lot of restaurants “that have fought back, and they’re open. And they don’t have any problems.”

But Sorkin continued, saying, “I’m sorry…I would like to keep our viewers as healthy as humanly possible. The idea of packing people into restaurants and packing them into Best Buy are different things.”

Santelli’s response: “I think the viewers are smart enough to make part of those decisions on their own. I don’t think that I’m much smarter than all the viewers, like some people do.”

This isn’t the first time things have gotten heated on-air this year between Sorkin and a fellow host. In May, he got in a heated debate with Squawk Box co-host Joe Kernen about the Dow’s recent market rally, with Sorkin later accusing Kernen of not caring about the 100,000+ deaths from Covid-19 and more generally just being in the tank for President Trump.

They addressed the argument on-air the following day, and Kernen said that the two had buried the hatchet off-air following the previous day’s broadcast.