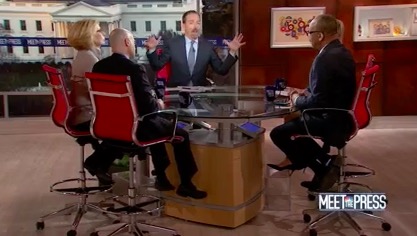 “Of all days to lose an hour,” said Chuck Todd at the end of today’s Meet the Press, “this was a day we needed an extra hour, and then some.”

“To avoid being sleepy eyed,” joked Andrea Mitchell. “There’s that, too,” said Todd. “That’s all we have for today. Neanderthals, sleepy eyes and all,” he said.

The joke, if you haven’t heard by now, stems from Pres. Trump’s comment about Todd at his rally in Pennsylvania last night. Trump resurfaced his “sleepy eyes Chuck Todd” monicker, this time adding, “He’s a sleeping son of a bitch.”

When Todd heard that last night, he used it as a way to promote this morning’s MTP.

Don’t miss @MeetThePress tomorrow! I know folks may be tired in the morning due to springing forward, so set those clocks and DVRs now before your eyes get too sleepy.

Some of his media colleagues came to his defense:

Pres Trump at a Penn rally calls my colleague and friend Chuck Todd a “sleeping SON OF A BITCH.”
Really classy.
Explain that to your children.