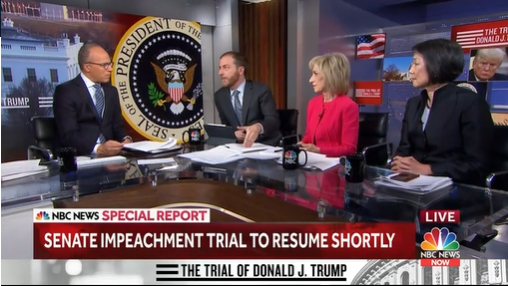 The broadcast networks began live coverage of the Senate impeachment trial at 1 p.m. ET this afternoon. Coverage will end by prime time, and will return tomorrow (Wednesday) at 1 p.m. ET.

Lester Holt is leading NBC News coverage today , saying at the outset, “Today the fight begins in earnest and no one knows yet how it will all play out.”

Well, we have been seeing it play out this afternoon, and some changes to the process have already been made.

Senate Majority Leader Mitch McConnell yesterday unveiled the proposed impeachment trial rules, under which each side would have 24 hours over 2 days for opening arguments. This proposal quickly drew criticism from Democrats, as it could see sessions stretching past midnight, beyond the point where most people would be able to watch.

But this rule was modified earlier, with a proposal under which opening arguments for each side would still last 24 hours, but over 3 days rather than 2. This would allow Senate sessions to wrap up around 9 p.m. ET, and could extend the length of the trial by 2 days.

Chuck Todd explained to viewers on NBC: “Here is what is fascinating, he went into a Senate lunch and it’s clear he didn’t have the votes and we are used to McConnell never putting out something unless he knows he has the votes… there is a reason he couldn’t move to dismiss this trial immediately. There are anywhere from four to 10 Republican senators that would like to see this play out exactly, at least, how the Clinton trial played out.”

NBC News chief White House correspondent Hallie Jackson added: “I will say this Lester, from my reporting over the last eight hours or so this morning, the defense team is positioned to be very fluid … sources close to the legal team want to make sure they are responsive to what House Democrats do.”

She added: “As you’re looking at these eight members of the legal team, they are trying to match their arguments and their responses to whatever House Democrat managers do.”

Here is CBS Evening News anchor Norah O’Donnell, speaking at the opening of the first adjournment:

“The question this morning is a question of fairness,” @NorahODonnell reports. “That’s what’s being debated between the Republicans and the Democrats as they embark on this historic impeachment trial of Pres. Donald Trump.” https://t.co/W0LKROmvEc pic.twitter.com/ZZ5PrN8c9m

Jonathan Turley was one of the Republicans’ witnesses during the House impeachment trial, and he also happens to be a paid CBS News legal analyst. Here he is providing his own insight into the morning’s festivities:

.@NorahODonnell: “Is it necessary to prove a crime was committed as an impeachable offense?” @JonathanTurley: “No. I don’t believe it is, & I think that the weight of the language of the Constitution, but also its history & precedent, make that a rather unsustainable position.” pic.twitter.com/O9KpT3fPdL

Like Todd, World News Tonight anchor David Muir seemed to believe there are some Republican senators who are at least considering letting this play out.

A number of these senators that we have been watching very closely in recent weeks, the moderates as they have been lumped into a group – Mitt Romney, Lisa Murkowski, Susan Collins, all taking copious notes. There was something else, too. We have played it over and over again on the news simply because it was a major point on the House side during the impeachment hearings – Dr. Fiona Hill. When they played that clip a short time ago about her talking about John Bolton saying “I don’t want to be part of any drug deal,” that was her testimony in talking about any deal to withhold aid when it came to Ukraine, the senators inside that room were watching that clip on the monitor as if they had never seen it before. And that was quite striking. Martha McSally of Arizona with her arms crossed studying the video. Mitt Romney sitting right behind her taking notes again with his notebook. You look out upon that room and you get a sense that for these senators they do recognize that history will look back on them, on this moment, the weight that they’re carrying and the decisions that they’re making.

“It was also other Republicans who seemed to be getting broader push back. Senator Ron Johnson telling our Trish Turner that there was pretty strong feeling which is why it was changed. This was not just coming from the small few. We are now getting a reaction from the Democratic leader Senator Chuck Schumer, of course welcoming these changes, but saying what matters is it shows the changes are possible and it underscores again why Democrats are hopeful they may be able to get Republicans to change their mind on that critical question of witnesses because Mitch McConnell, of course, has made very clear he does not want to call additional witnesses, he wants this to move very quickly. Democrats are still hoping they can put enough pressure on those key moderate Republicans to be able to actually move ahead and call key witnesses like former Security National Advisor John Bolton and Mick Mulvaney.”