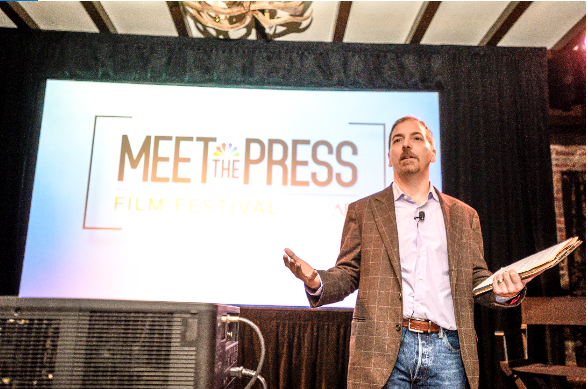 We spoke with NBC News political director and Meet the Press moderator Chuck Todd yesterday, about an hour before MTP Daily, his weekday show on MSNBC. Todd kicked off his Thursday broadcast with an impassioned opening monologue that has since gone viral.

WATCH: President Trump calls on China to investigate political rival. #MTPDaily@chucktodd: “I don’t say this lightly, but let’s be frank: a national nightmare is upon us. The basic rules of our democracy are under attack, from the President.” pic.twitter.com/O5jUAXFSp8

What lessons has the longtime NBC Newser learned from 2016 that he’s taking with him as he covers the 2020 campaign? According to Todd, the answer, like the era we’re living in, is complicated. He also talked about the third annual Meet the Press Film Festival, which will take place Sunday and Monday in D.C.

This Q&A has been edited for length and clarity.

TVNewser: How do you plan to approach Meet the Press and MTP Daily differently during the 2020 election vs. 2016?

Todd: A year ago, I would have said, “Look, we’re certainly approaching 2020 differently in general, there’s more people on the ground, more embeds around the country, more of this, more of that.” But it’s almost an impossible question to answer in this moment in time because there’s nothing about this cycle that’s going to resemble any presidential cycle in our history. That’s the mindset I think we should all have: to realize that there is no model for what we’re about to cover. This is a new moment and a challenge for everybody. Part of me always repeats the line from Back to the Future with Dr. Brown, where he says, “Where we’re going, there are no roads.” No one really knows, because we are in such uncharted territory right now.

A presidential impeachment inquiry seems like a huge moment for political journalists. Everyone cares about what’s going on right now, even the most casual of news consumers. Do you feel more pressure and added responsibility to your audience to explain this landmark event as clearly as possible?

I am a believer in the explanatory. Last Sunday’s show, I devoted an entire segment to the [Ukraine correspondence] timeline, to try and explain the series of events that got us to this point. In the era of the “24-second news cycle” of social media and cable news, we haven’t had the, “all right, here’s how we got here.” There are places that have done it in writing, but it’s been few and far between on TV.

So yes, I felt very strongly about it. That was an anecdote, but it was really interesting.  It got a tremendous amount of feedback, because it was explanatory, and I do think that all of my colleagues should always find a place and find a moment to be explanatory on this. [You asked,] “Do you feel this obligation?” Yes, I do. I have to explain it as clearly and as thoroughly, but with clarity. It has got to be both thorough and clarifying, which is certainly not easy. It’s impossible on social media. It’s tough on cable, because of just the nature of cable, and I certainly feel almost more obligated to do that on a Sunday.

Cable news is a different animal from broadcast. How do you approach the Sunday morning audience for Meet the Press vs. the weekday MTP Daily audience?

I know that there are two different audiences. We have actually studied it and there’s approximately a 10% crowd crossover. It’s much smaller than people realize. The way I approach it is, the Sunday morning viewer has not watched cable for most of the week. We have learned this through own research. That doesn’t mean they’re not more aware than ever before. In that sense, I try to stay away from the incremental, and cable is always incremental. It thrives on the incremental when it comes to news coverage: “Developing now.”

I do know that the Sunday audience is looking for, “What the hell just happened, and what the hell does all this mean?” The Sunday viewer doesn’t want to be buried in details, but also doesn’t want us to gloss over them. There’s that balance. On the cable side, there is an expectation that your audience is following the story as it has gone, so you can shorthand things that you can’t necessarily shorthand on Sunday. That’s another thing that I realized over time.

Why is a Sunday show putting on a film festival? What were those initial conversations with [NBC News chairman] Andy [Lack] like?

Well, we’re not a Sunday show, so I take issue with that. Maybe five years ago, when all Meet the Press was, was a Sunday show. [Now,] we’re a trusted legacy brand.

The mission of Meet the Press is, on one hand, as a public affairs program, a way to sit down either at start of a new week or the end of an old week, on any given Sunday. It’s supposed to be the thoughtful place to have what I call,”A sit down on the couch and listen” discussion, a place where you can take a breath. But there’s still a lot we don’t get to get to.

What the film festival allows us to do is stretch our legs on the other part of the Meet the Press brand, the unwritten contract we have with our viewers: “We’re a place that tells you how to get smarter on a topic or how to get more depth on a topic.” I think the documentary game over the last 10 years has changed completely. Millennials consume them in ways that I used to consume books. The appetite has never been greater, and the barrier to entry to make a doc has never been lower.

When we had our 70th anniversary coming up, I thought we should do something with it. So we decided to have a film festival. Not just a party, but have an event that actually does something important. I really thought it was going be a one-time thing. How did I talk Andy into it? I made a business case: “This is good content for Comcast, right?” It was incredibly successful. We worked with the American Film Institute, and they said, “Hey, why don’t you guys do this every year?” There was never really a film festival that featured short documentaries. Most of these film festivals put the “shorts” in a corner.

Every year, there are new angles to this. I look at the film festival as allowing us to complete part of our mission, and I feel like in the Trump era, in particular, it has been very difficult to surface important issues that our government needs to tackle that don’t always get the headline. That’s what I’ve been proudest of. If you ask me, “why are we doing this?”, I think it’s part of the larger mission of what we’re supposed to be doing with Meet the Press.

What’s one news story is not being talked about enough as a result of all this attention being given to the impeachment inquiry?

There are so many competitors for that. I think the fact that there is what I would call a rhetorical brush fire on every single continent–like Australia right now–that has the ability to turn into a full blown crisis, or a low grade war. I don’t really feel like we have properly fully appreciated the instability that is sitting there, because the western alliances are so shaky. The Middle East is in a tinderbox. You look at what’s happening with India and Pakistan. I think the biggest story is the instability of the world right now, and we’re a big part of it. We’re so consumed by our own instability, that we don’t realize what we’re also living globally.

Who’s at the top of your list to book on the show, and what would you ask that person?

Now a fun question: the Green Bay Packers will win how many games this year?

I am in the category of 12. I think they’re the best team in that division, and I think it’s going to take 12 to win that division. The only thing that gets me nervous is I do worry that the relationship between [quarterback] Aaron Rodgers and the new coach Mr. [Matt] LaFleur is about as stable as the relationship was between President Trump and [former White House chief of staff] John Kelly, and it could bring the team down. That’s my only caveat there.

The third annual Meet the Press Film Festival in collaboration with the American Film Institute takes place on Sunday, Oct. 6, and Monday, Oct. 7, in Washington D.C.