NEXT:Sunday Show Ratings: July 29
PREVIOUS:Jim Acosta to Sarah Sanders: 'Will You Say Right Here at This Briefing That the Press Is Not the Enemy of the People?' 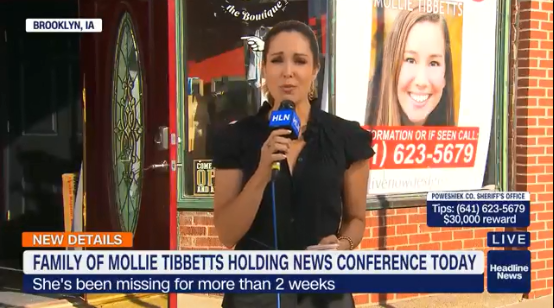 The disappearance of 20-year-old University of Iowa student Mollie Tibbetts has garnered national attention, and HLN has traveled to her hometown of Brooklyn, Iowa to cover the story.

CNN and HLN anchor Christi Paul is reporting live from Brooklyn all morning and afternoon.

“This is ‘The little town that could…,” Paul told TVNewser from Iowa. “Pictures of Molly are plastered on store fronts, cars, front yard signs & people have said if it takes a $50,000 reward to get her back…we’ll get $50,000.”

She continued: “I have so much respect for the people who’ve told me they’re truly scared right now, they’re jolted & they’re now decidedly vigilant about where their own children are & who is around them.”

The network will also be live for today’s news conference with the family and Iowa Crime Stoppers officials, and will stay on the story all day, and at 1 p.m. ET, HLN will be airing a 30-minute special, Finding Mollie:  The Search for Mollie Tibbetts, which will include Paul’s one-on-one interviews with Tibbetts’ boyfriend, Dalton Jack, father and neighbors.

The last time anyone saw University of Iowa sophomore was when she went jogging in Brooklyn, Iowa on July 18, and police and volunteers have been looking for any sign of Tibbetts since that day.

According to Fox News, Tibbetts had been dog sitting at her boyfriend’s house and after her run, she returned to the home to do homework, policesay. But at some point, she vanished. The FBI is investigating foul play.

The Associated Press reported that when Tibbetts disappeared, she was only a few days away from traveling to the Dominican Republic with her boyfriend to attend his brother’s wedding.

“I spoke with friends of Mollie’s family who are also neighbors of Dalton Jack, Mollie’s boyfriend,” Paul said. “They’re driving to Chicago this week & stopping in every small town along Highway 30 to put up a poster of Mollie.  It’s so sad but so motivating to see people doing good. And Mollie’s dad told me it means more to him than anyone can fathom.  When you see people working to help your child…any parent can absorb the magnitude of what that does for your heart.”

So many ppl want to help #FindingMollieTibbetts I talked w/her dad, her boyfriend & her neighbors – and I’m w/you throughout the day from Brooklyn, Iowa. Will bring latest on press conference at noon et. But listen here to what her dad told me… https://t.co/lc6H6e6joa

Local crews are set up to cover the presser: 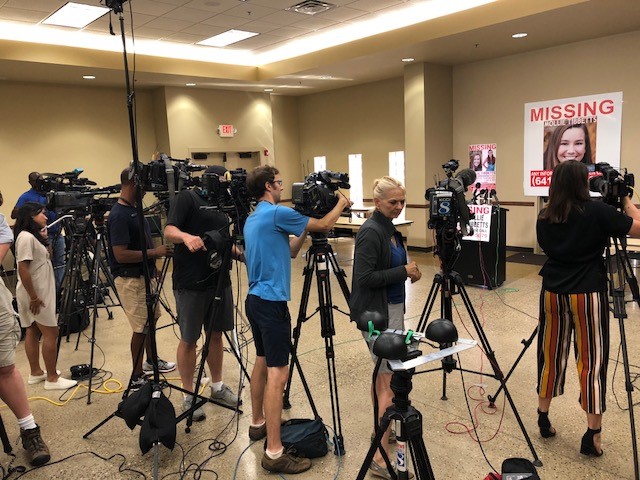 Fox News is also covering the story. Matt Finn will be live on scene from Brooklyn, Iowa. The father of Mollie Tibbets, Rob Tibbetts appeared on Fox & Friends this morning as well as The Story with Martha MacCallum on Monday evening. The father and boyfriend will be appearing on America’s Newsroom today in the 11 a.m. hour.