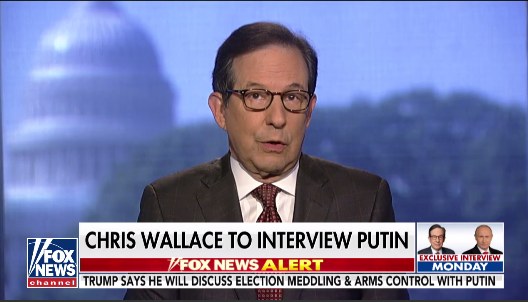 Russian President Vladimir Putin will speak with Fox News anchor Chris Wallace after his meeting with President Trump in Helsinki, Finland next week.

The sit-down will air in its entirety on Monday, July 16, and the plan is to focus on the summit, Syria, Russian interference in the 2016 U.S. election, arms control and where Putin sees Russia’s place in the world.

The anchor of Fox News Sunday, Wallace has interviewed high profile domestic and international dignitaries over his 50 years in broadcasting, and was also the first journalist from Fox News to moderate a general election presidential debate.