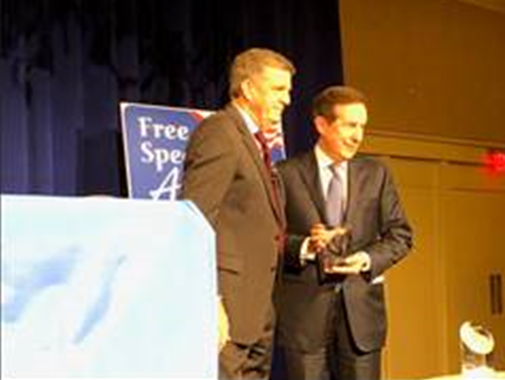 Fox News’ Chris Wallace is the recipient of yet another award in celebration of his long, distinguished career in journalism. This time, it’s the Media Institute Award, presented to Wallace on Wednesday evening the annual Free Speech America Gala in Washington.

First, the happy portion. Wallace provided a history of his career in journalism, and how the profession has provided him with such a full, rich life.

I feel like I’ve been on a magic carpet ride that has taken me around the world—to meet extraordinary people—to see remarkable events—and then, yes, get the chance to share it with everyone else.

I spent a week with Mother Teresa at her mission in Calcutta—just after she won the Nobel Peace Prize.  She took me to what she called the “Home for the Dead and the Dying”—in effect, the first hospice—where she cared for people—the elderly, babies–who had been left in the street to die.  With no medical care—just a place to sleep and some food to eat—fully half of the 36-thousand “dead and dying” recovered–and went back to lead their lives.

I covered 4 Reagan-Gorbachev summits—from Iceland to Moscow—and reported on how a longtime Cold Warrior built a relationship with the head of the Communist Party—that led to the first reduction in nuclear arsenals in history—and eventually to the collapse of the Soviet Union.

I moderated the third Presidential debate between Donald Trump and Hillary Clinton—watched by 80 million people—the 3rd biggest audience for a debate in history.

And this summer, I interviewed Vladimir Putin just after his summit with President Trump.  When he denied any Russian government interference in the 2016 election—I presented him with the indictment of 12 GRU military intelligence officers—charged with doing just that.  He wasn’t pleased.  And afterwards, I took my wife Lorraine on a week’s vacation to St. Petersburg and Moscow.

What an adventure it has been!  I feel so lucky—so blessed–to be in this business!

Then, the bleaker, albeit hopeful version. This included talk of Pres. Trump and how the relationship between press and public has seemingly worsened:

Having grown up in journalism—having spent half a century as a reporter—you can imagine how I felt when I saw that Trump tweet on February 17th of last year:–“The fake news media (failing NY Times, NBC News, ABC, CBS, CNN) is not my enemy.  It is the enemy of the American people.”  To say I never imagined the President of the United States would say that about a free, vigorous, adversarial press is a big understatement.

But what’s most alarming is—a Presidential tweet that was so shocking just 20 months ago—is now part of the national bloodstream.  A Gallup Poll in June on attitudes towards the media—found 69 percent said their trust had decreased.  An Axios poll found 70 percent of Americans now agree—“traditional major news sources report news—they know to be fake, false, or purposely misleading.”

Lord knows, we can’t stop the President from tweeting—especially when he finds a line of attack that’s working so well.  The question we have to ask ourselves is—how do we react.  And I think too many of our colleagues have taken exactly the wrong approach.

Too many of us have decided the way to respond to a President who goes so far over the line bashing the media—is to fight back.  To respond to his invective with attacks of our own.  I don’t have any problem with fact-checking President Trump—with calling balls and strikes.  That’s our job.  But I now see reports coming out of the White House—both print and television—that are grounded more in opinion than fact.  And when we fall into that trap—we are playing the President’s game.

Let’s remember: Donald Trump may be larger than life.  But all of us have seen Presidents come and go.  They capture the spotlight—grab the nation’s attention—and then pass from the scene.  And we need to think where our business will be when Mr. Trump is no longer in the White House.

Will we look back on our coverage with pride—or regret?  Will we say we played our role as impartial observers—or as players who crossed the line into advocacy? During a time of divisive, tribal politics—did we fall into our own tribal news coverage?

I want to close by reminding you what’s at stake here.  Jamal Khashoggi wrote his final column for the Washington Post—before he disappeared October 2nd. He wrote this about the repression of free speech and a free press in much of the Arab world.  “Arabs living in those countries are either uninformed or misinformed. They are unable to adequately address, much less publicly discuss, matters that affect the region and their day-to-day lives.  A state-run narrative dominates the public psyche, and while many do not believe it, a large majority of the population falls victim to this false narrative.”

Could it happen here? No time soon.  But when 70 percent of our fellow Americans believe major news outlets “report stories they know to be fake”—It is past time to be vigilant.  A free, fair, and fiercely independent press is essential to democracy. And we must never forget that.

Cathy Hughes of Urban One was also awarded the distinguished honor. The Media Institute is a nonprofit research foundation specializing in communications policy and the First Amendment.