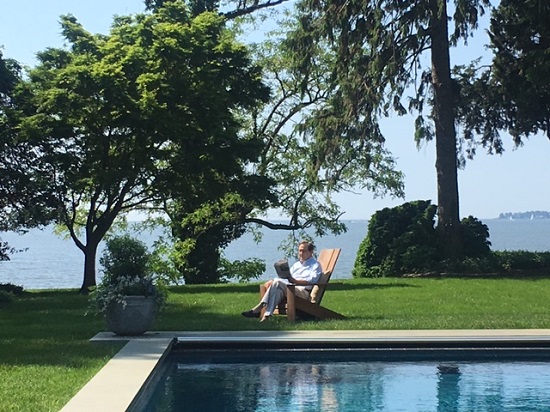 Big weekend for Chris Wallace. His long-anticipated interview with President Trump aired yesterday on Fox News Sunday, which generated a number of media-related headlines. Additionally, the Fox News anchor is profiled in the December/January issue of Town & Country magazine. The story hit the web on Saturday.

“I view my job as being the cop on the beat, walking around with a nightstick and trying to keep people honest—both Republicans and Democrats,” Wallace told Town & Country’s Andrew Goldman, who visited Wallace at his Annapolis, Md., compound for the story.

Wallace told Goldman he “is rankled” every time a George Stephanopoulos or Chuck Todd interview makes news and his doesn’t. “Honestly, I think I’m better,” he told Goldman when asked about how he stacks up against the other Sunday show hosts. “The only one I didn’t feel that about was Tim Russert.”

Fox News is the last job Wallace says he’ll have in journalism, and Goldman writes: “According to industry sources, Wallace was approached about taking over CBS Eve­ning News last year, but a network newscast didn’t appeal to him (his Fox contract extends beyond the 2020 election).” We reached out to CBS News for comment on this particular line, and have yet to hear back. Jeff Glor was given the job on Oct. 25, 2017. Glor’s one-year anniversary in the chair comes up early next month).

Goldman also spoke with former ABC News White House correspondent Sam Donaldson for the story, who said of Wallace, “If Fox News is the type of entertainment people want, believing somehow that they’re listening to solid news reporting, more power to them. But Chris has not joined that pack. He plays it straight. He deserves his reputation for doing that.”

Wallace and Donaldson covered the Reagan White House at the same time for NBC and ABC, respectively.

Goldman brought up the initial Wallace-Trump showdown at the first GOP debate in August 2015.

President Trump got his initial taste of the prickly Wallace during Fox News’s first Republican primary debate in August 2015, when Wallace asked how a businessman who had run four businesses into bankruptcy could lead a country with a GDP of $18 trillion. The following night on CNN, during the rant when he said co-moderator Megyn Kelly had “blood coming out of her eyes, blood coming out of her…wherever!,” Trump said Wallace had “blood pouring out of his eyes too!”

He finished by needling Wallace with a familiar insult. “The great Mike Wallace was a friend of mine,” Trump said. “He was a tough cookie and he was great. And the son is only a tiny action of Mike, believe me.” If Trump’s comment ever stung him, Wallace is over it. “One of us has daddy issues, and it isn’t me,” he says.

He also provided a tidy summary of Wallace’s TV news path up to Fox News:

He rose quickly at NBC, becoming chief White House correspondent, and, in 1987, host of Meet the Press. A year later, after the new president of NBC News told him he was being replaced in both capacities, ABC hired him for the new news magazine Prime Time Live.

After Bill Leonard died, in 1994, Chris and Mike became closer. Chris’s marriage collapsed around the same time, and Mike, also divorced, started calling nightly. Chris now says, “That’s really when we became best friends.” It wasn’t always easy, though. In 1996, Chris arrived at a comedy club to interview the comedian Chris Rock, only to be told that 60 Minutes had big-footed Prime­ Time for the booking—and the poacher had been Mike Wallace himself.

When Mike died, in 2012, his son opened his eulogy by saying, “Let’s be honest…at some point over the years…many people in this room were not speaking to my father.”

Chris found himself stuck at ABC after Diane Sawyer decided she wanted to merge Prime Time Live with 20/20. In 1999 he got an offer to join the soon-to-launch 60 Minutes II, which would have allowed him to work with his father, but he says that even though he was miserable at ABC, Sawyer stood in the way of the network letting him out of his contract. In 2003, at the end of that contract, Wallace made a different move: His friend Brit Hume, who had leaped from ABC to Fox News, introduced him to Roger Ailes.