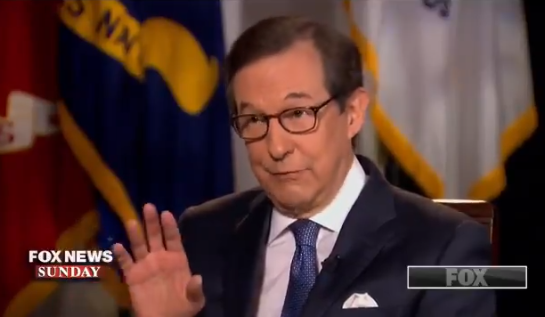 Chris Wallace sat down with President Trump for this week’s edition of Fox News Sunday. It ended up being a wide-ranging interview touching on a variety of subjects, from the Mueller investigation, to the mid-term election results, to the Saudi government’s role in the murder of Washington Post columnist Jamal Khashoggi.

The Jim Acosta saga was brought up during part two of their lengthy sit-down. Wallace hasn’t been a fan of Acosta’s behavior in these press conferences, but he has also been quite critical of the president’s “enemy of the people” refrain, and expressed solidarity with his colleagues in the media during the interview, which aired today.

Wallace asked for Trump’s thoughts on the court’s decision in favor of CNN and giving Acosta his press pass back (for now). The president claimed the court’s decision “wasn’t a big deal.” He also said there will be “rules” reporters will supposedly need to abide by going forward.

A simple solution, Wallace said, would just be to not call on Acosta at all. So why not just do that?

Actually I like to do it, but in many cases I don’t.  He’ll stand up, he’s unbelievably rude to Sarah Huckabee, who’s a wonderful woman, unbelievably rude and I see that and I actually ask her the same.  Why do you call on these people that are so nasty?

I think one of the things we’ll do is maybe turn the camera off that faces them because then they don’t have any air time, although I’ll probably be sued for that and maybe, you know, win or lose it, who knows.  I mean, with with this stuff you never know what’s going to happen.

Wallace also pressed Trump on the president’s “the fake news media is the enemy of the American people” refrain.

TRUMP:  I can’t talk for other people, I can only talk for me.  I will tell you —

WALLACE:  But you’re — but you’re seen around the world as a beacon for repression, not for —

The news about me is largely phony.  It’s false.  Even sometimes they’ll say, uh, “Sources say.”  There is no source, in many cases – in many cases there is —

WALLACE:  But — I understand you don’t like your coverage —

Wallace continued to press the president on his stance, but it was tough pinning him down.

WALLACE:  But but the President [doesn’t] get to decide what’s fair and what’s not.

TRUMP:  I can tell what’s fair and not and so can my people and so can a lot of other people.

WALLACE:  I understand that but but —

TRUMP:  When you do something very good and they write it badly and this is consistently when you – as an example, rarely do they talk about —

Wallace also brought up Barack Obama’s contentious relationship with Fox News, but says that doesn’t compare with how Trump is talking about the press:

WALLACE:  Barack Obama whined about Fox News all the time but he never said we were the enemy of the people.

TRUMP:  Well, no, he didn’t talk about the news, he didn’t talk about anything, I’m only saying it very differently than anyone’s ever said it before, I’m saying fake news, false reporting, dishonest reporting, of which there is a lot, and I know it.  See, I know it because I’m a subject of it. A lot of people don’t know it. But when I explain it to them, they understand it.

And, Chris, you know that better, you don’t have to sit here and act like a perfect little, wonderful, innocent angel, I know you too well, I knew your father too well, that’s not your gene.  But let me tell you —

Wallace has publicly stated he thinks the mainstream media doesn’t like Trump as a person, and that influenced their reporting, but that doesn’t excuse the president’s rhetoric towards them.

“We’re all together,” he states.

WALLACE: I think some of the coverage of you, sir – and I’ve said it on the record – is bias, but I don’t think that there is –

WALLACE:  I don’t know, but the idea that you call us the enemy of the people.

TRUMP:  I’m not calling you that.

WALLACE:  I’m talking about, we’re all together.

TRUMP:  I’m not calling you – you don’t understand it.

WALLACE:  We’re all together.

WALLACE: It doesn’t matter whether you call, but when you call CNN and the New York Times and – we, we’re in solidarity, sir.

TRUMP:  I am calling fake news, fake reporting, is what’s tearing this country apart because people know, people like things that are happening and they’re not hearing about it.