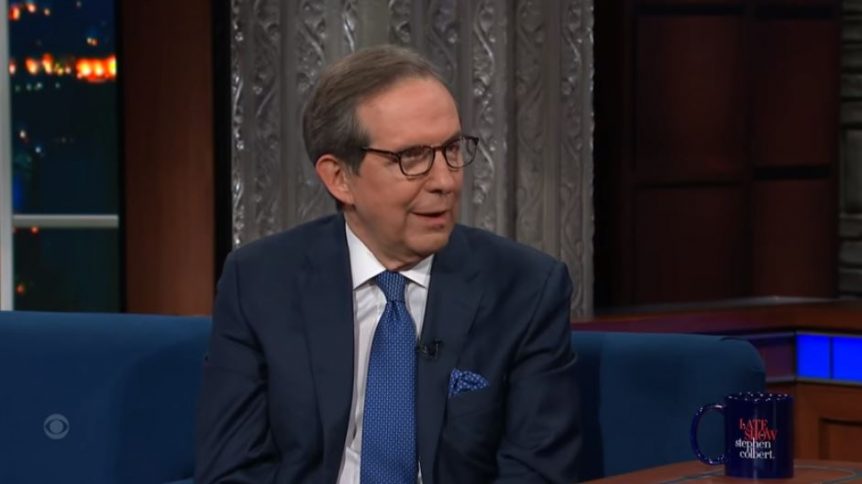 Fox News Sunday anchor Chris Wallace has become a frequent guest on The Late Show with Stephen Colbert in recent years. Wallace joined Colbert again Wednesday on the show to promote Countdown Bin Laden, his new book on the backstory of the mission that took out Osama bin Laden.

During the conversation, Colbert said that Wallace has had people on his show, Fox News Sunday, who falsely claim the 2020 presidential election was “stolen.” There are anchors, namely Jake Tapper, who have said publicly that they have banned election deniers from their shows.

After noting that Wallace does in fact push back on people who might try and advance the bogus “big lie” claim on Fox News Sunday, he asked the anchor, “Have you ever seen anything so cynical in Washington D.C. than people saying things they know aren’t true, that they know has to have lasting damage on our democracy?”

Wallace replied that no, he has never seen anything like it. “I have been in Washington 40 years so I have seen a lot of bad stuff. But nothing like this,” said Wallace. “Someone would say to me, well are they delusional?’ Well maybe some of them are. But I think it’s worse, I think more of them have cynically decided because of the Trump base because they don’t want to get crossed wires with the former President, they are going to say something they know is not true.

“Now, I don’t believe you sit there and say, I am not going to have them on. But if I am going to have them on, I am going to hold them to account over and over about—what about this election? What about —and I have said this to many of them—‘Is Joe Biden the duly elected President of the United States?’ And many of them said, ‘Well, he is the president.’ No, no, ‘Was he elected fair and square?’ So we go back on this. I don’t let it pass.”

When asked about the infamous storming of the U.S. Capitol earlier this year, Wallace said, “January 6 was one of the worst days. I covered Congress for several years when I first came to Washington in 1978 and, as I am sitting there live-watching it on television and seeing this mob coming to the Cathedral of our Democracy, and sitting in the chair that the president of the Senate sits in and running around the rotunda, I was sickened.”