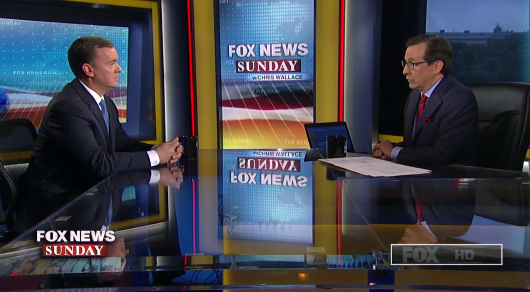 Fox News Sunday anchor Chris Wallace didn’t give an inch during a lengthy conversation with NRA executive director Chris Cox regarding gun safety, coming in light of the massacre in Las Vegas that left nearly 60 concertgoers dead and over 500 injured.

Wallace allowed Cox to respond to the Democratic party’s call for more gun control in light of the massacre, before having him watch a graphic video from the massacre as bullets pummeled the crowd. Fast forward to about 9:30 for this particular scene.

The executive took a sip from his mug at beginning of the video, and then quickly stopped and seemed to grow increasingly more uncomfortable as the video continued.

“Why do you need to have a magazine that holds 100 rounds?” Wallace asked.

“There’s no one in America who watches that video who’s not horrified,” Cox said. While he admitted that a “fair question” was being asked by Wallace, the NRA exec insisted that banning a law-abiding citizen from owning high-capacity weapons would not prevent a “criminal” from “misusing” them.

“Why do shooters need, people that hunt, to protect themselves, why do they need magazines with 100 rounds?” Wallace asked. When Cox said that question—and not the weapon itself—was “intentionally designed to scare people,” Wallace asked, “You don’t think 10 rounds would be enough?”

“It depends on what you have it for,” Cox answered. “People can own things safely and responsibly and be a danger to no one.”

The executive then said “the violent culture coming out of Hollywood” and video games is a reason why shooters should be allowed to have gun magazines with 100 rounds.