NEXT:Kellyanne Conway's Husband George Is Joining MSNBC Coverage of the Impeachment Inquiry
PREVIOUS:Norah O'Donnell: 'If You Were Bored You Weren't Paying Close Enough Attention Because There Were Lots of Little Nuggets Here to Follow' 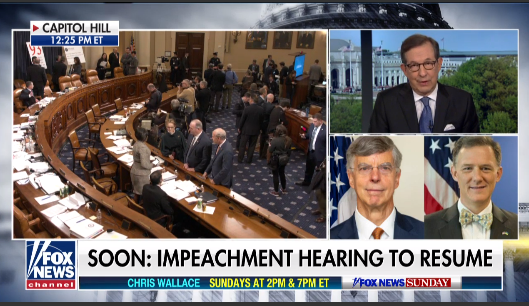 We’re more than two hours into day one of the impeachment inquiry into Pres. Trump, and at least one high-profile TV newser feels that acting Ambassador William Taylor has been an effective witness for the Democrats on the House Intelligence Committee.

“As somebody who has covered a lot of trials, and I know Judge Starr has as well, when you listen to direct examination, this is pretty devastating. When you have cross-examination by the defense attorney, sometimes it turns out not to be quite as effective. You have to be somewhat cautious in reacting to what we’ve seen so far. We haven’t heard what Devin Nunes or his lawyer Steven Castor is going to ask. Having said that, I think William Taylor was a very impressive witness and was very damaging to the president. First of all as you pointed out, he took very copious notes of almost every conversation when he put quotes in his opening statement regarding what was said. It also doesn’t hurt that he has a voice like Edward R. Murrow, he’s a pretty impressive presence up there. He was very nonpolitical. He went out of his way to talk about what he knew and what he was testifying to, the only thing he talked about was his strong feeling that it was in the US national security interest to support Ukraine in the fight against Russia. He certainly wasn’t taking any partisan position. I thought the two most important parts of his testimony were his recounting, and this is new news, July 26th he found out since he has testified before the committee with closed doors that Gordon Sondland who was really the point person between Trump and the Ukrainians, much more so than Taylor who never even talked to the president. It was on the phone in a restaurant in Ukraine with the president on July 26th the day after the phone call and that he could overhear the staff member for Taylor could overhear the president saying what about the investigation. So clearly the investigations, and by that Taylor thought investigations into the Democrats in 2016, also the investigation into Biden was very much on the president’s mind. Then the aid asked Sondland what the president thought about Ukraine and this is a quote from the Taylor statement: ‘Ambassador Sondland responded to President Trump this is more about the investigations of Biden, which Giuliani was pressing for, he cared about that more than Ukraine.’ One more exchange, Daniel Goldman asked the question, ‘Have you ever seen foreign aid conditioned on the political interest of the president?’ Taylor said firmly, no I have not.”

During NBC News’ impeachment inquiry coverage, Meet the Press moderator Chuck Todd added: “The facts are actually no longer in dispute. In fact, the new Republican defense is not to dispute the facts, it’s to start to debate motive, start to debate what was his intent, and one thing that they’re focused on is trying to say well you don’t have evidence that there was a direction, that the President directed him to do this.” 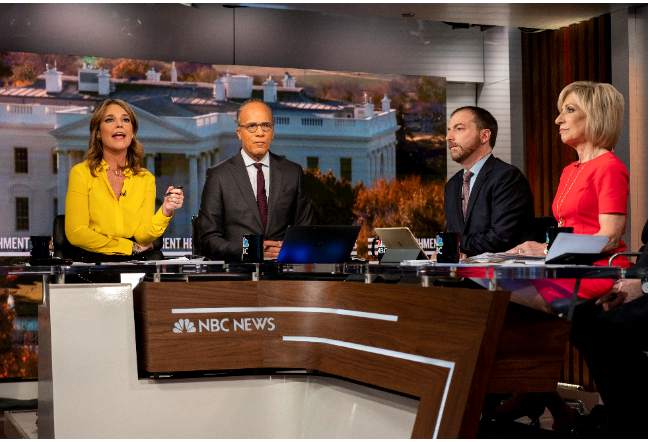 Pres. Trump’s former chief of staff Reince Priebus joined CBS News’ coverage of the inquiry during the lunch break, and engaged in a somewhat contentious back and forth with CBS Evening News anchor Norah O’Donnell.

Priebus: The Republicans aren’t able to actually call any witnesses to defend or explain what the president’s state of mind is.

O’Donnell: They’ll be able to call witnesses. They put forward a list..

Priebus: If enough Democrats agree  with the list, sure, but it’s a stacked court. We call that in the law a monkey court, so we’ll see.

O’Donnell: I’ve heard that argument before. Ambassador Haley made that argument Sunday morning. The aid was withheld for a long time. It was Republican and democratic members of congress that said to the white house this is a problem. You heard ambassador Taylor saying this is a problem, and yet still the president of Ukraine hasn’t had a meeting with President Trump.

“However, the Republicans aren’t able to actually call any witnesses to defend or explain what the president’s state of mind is,” former WH chief of Reince Priebus claims.
“They’ll be able to call witnesses,” @norahodonnell says. https://t.co/wu80zMCSiM pic.twitter.com/VGxPP94EAz

Priebus: Ultimately, the money was released. Do the 3,000 people who are out there in eight states who are going to decide this election do they believe it is appropriate to impeach a president because the release of money was delayed and the case is now being made because the president may have not had bad intentions? I think it’s a bridge too far.

O’Donnell: Do you think that the president of the United States took actions that strengthened Russia’s hand?

O’Donnell: The president was pushing to have Ukraine say that they were interfering with the election which ever intelligence agency said did not happen. It was the Russians, that’s clear.

Former WH COS Reince Priebus: “I think most Republicans accept that [Russia interfered in 2016 election].”
.@norahodonnell: “The president was pushing to have Ukraine say that they were interfering with the election, which every intelligence agency has said did not happen!” pic.twitter.com/Ba4YS9MQbb