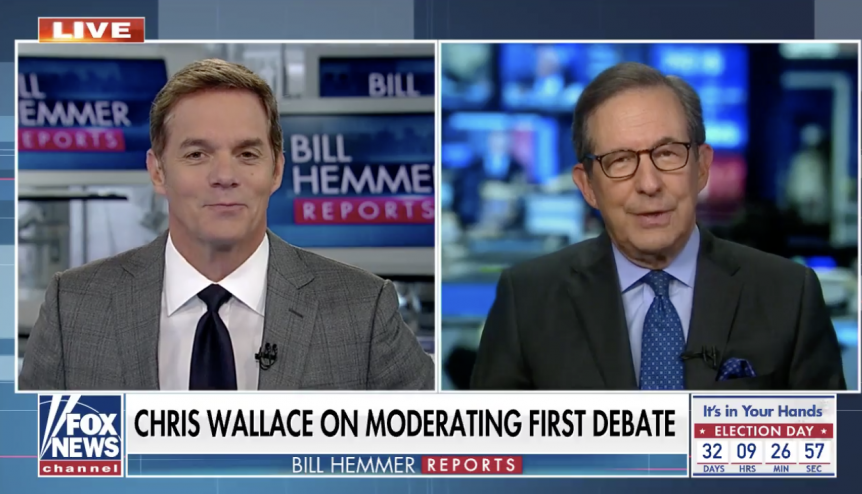 “I had just gotten over the PTSD and then you put me right back into it,” Wallace quipped, before the discussion with Hemmer began.

Wallace proceeded to give his side of the story:

“Here’s what happened: We began the first segment on the Supreme Court. They each got their 2 minutes and they both obeyed in that particular case. Then, then Biden started to answer a question and the president started interrupting him. My initial reaction was, “This is great.” So often these debates become parallel news conferences where one candidate answers the question, the other candidate answers the question to him.

When the president started to engage with Biden, I thought we are going to have a real debate here. It became clearer and clearer over time that this was something different, and that the president was determined to try to butt in and throw Joe Biden off. I saw another Fox analysis that indicates the president interrupted either Biden’s answers or my questions a total of 145 times, which is way more than one a minute.”

And then Wallace gave perhaps the news bite-worthy line of the discussion, telling Hemmer, “He [President Trump] bears the primary responsibility for what happened on Tuesday.”

While many media figures (and laymen/women on social media) criticized Wallace for not doing more to rein in the candidates, Hemmer asked Wallace how he responds to that criticism?

Wallace pushed back a bit, saying that he’s gotten a lot of praise in addition to getting a lot of criticism.

“I guess my answer is ‘hindsight is 20/20.’ If I had known the debate was going to keep going this way, I guess I thought originally the president was going to engage in a debate with Biden and let Biden answer so they could go back and forth. Then, thought maybe the president is going to do this in the first segment to try and rattle Biden. When that didn’t work, I thought and I think he would’ve been well advised to pull back and let Biden talk more. Biden’s answers weren’t always great. In fact, sometimes I think if the president had stepped back and let Biden give his answers, he could’ve been more effective in picking them apart. It was only 45 minutes in that I realized what a total mess and to service this was to the country and try to stop it.

Hemmer also asked Wallace if he has watched the debate? “Oh god, no,” he responded. “It wasn’t something that I want to revisit. This is going to take a while before I watch this one again.”