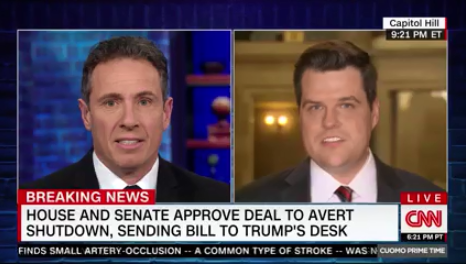 As we noted yesterday, Sean Hannity is increasingly finding himself having to fend off accusations from other TV (and print/digital) newsers that he has unique access to President Trump.

Multiple CNN hosts have recently alleged that Hannity has more influence over Trump’s policy than perhaps he is letting on.

Last night, Hannity’s 9 p.m. competitor Chris Cuomo was in the midst of a conversation with Florida Republican congressman Matt Gaetz about funding for the president’s proposed border wall when the host brought up Hannity and what he described as “total control” over the president.

Gaetz, a longtime Trump supporter, said yesterday’s border deal was “a win” for the president.

“I don’t know why it’s a win for him,” said Cuomo. “Because he, back in the day –who knows where he is now that, you know, he’s got Hannity and [Ann] Coulter and all these people in his head all the time, rent free by the way–”

“No, look, Sean Hannity has been a friend to me and he is incredibly persuasive and powerful,” said Cuomo. “I would argue, he is without question the most powerful person in the media because what he says, the president does. Not vice versa.”

Cuomo added: “What Hannity says the president does.”

Gaetz wasn’t totally buying the CNN newser’s argument, saying, “it’s not that clear. I have been witness to interactions where they have exchanges and robust discussions, and bounce ideas off of each other. We have a resident that bounces ideas off of a lot of different people. He’s not just stuck in the West Wing.”

Cuomo responded: “We could go on all night, as a statement against interest, of how crazy it is that with all the expertise the president is privy too, that he chooses someone like me to listen to about major policy matters, is something that I could really scrutinize all night.”

Gaetz then appeared to take a shot at Cuomo, while defending Hannity. “I reject the premise that Hannity is someone like you. You are very different.”

“We are different,” said Cuomo. “But when it comes to what either of us knows about national policy and how to lead and how to govern, we’re both at zero. That’s why we’re on TV, and not in elected office.”

“And he knows it,” Cuomo added. “He’d be in public service if he thought he could do it better than everybody else. He likes this life, and he’s loving his access. Good for him.”