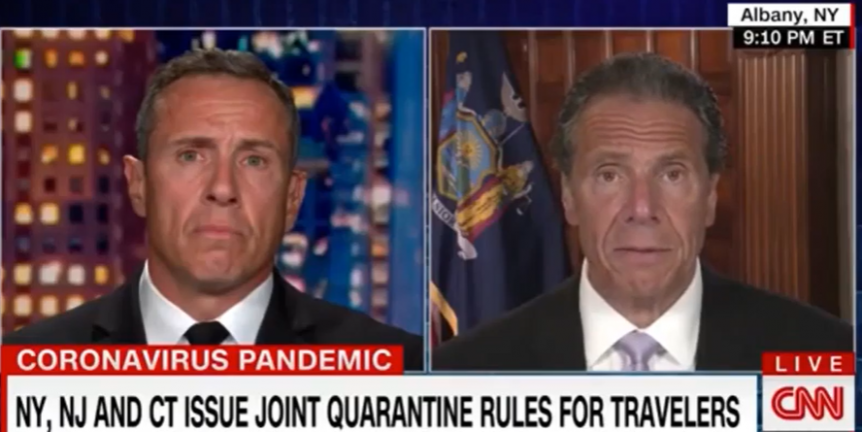 There have been critics of Chris Cuomo having his older brother, New York Governor Andrew Cuomo, on his show in recent months. Some newsers have criticized their jokey, wise-guy back-and-forth banter. While parts of their interviews have made for fun viral videos, others feel they haven’t been serious enough considering the nation’s problems. Others believe that the overall dynamic of having a journalist interview a family member on a news program is inappropriate.

Whether or not you believe the criticism is justified, it’s interesting that Cuomo himself came right out on Wednesday’s broadcast of Cuomo Prime Time and acknowledged the unusual circumstances, adding that “he isn’t objective” when it comes to his brother.

The New York governor appeared on Cuomo Prime Time last night to speak about quarantine measures New York, New Jersey and Connecticut are instituting against states that are seeing high levels of Covid-19 spread, including Texas, Florida and Arizona. People who are traveling to the tri-state area from those states and others must quarantine for 14 days once they arrive.

The Cuomos went back and forth about the new policy, and CNN’s Cuomo did ask the governor about the state’s nursing home deaths scandal (early mandate that nursing homes must accept Covid-19-infected patients), as a journalist should, but the governor seemed to brush off those questions.

CNN’s Cuomo appeared to give what looked like a farewell on-air sendoff to his brother during the broadcast, as it looks as though appearances from the New York governor will be less frequent simply because the pandemic has worsened in other parts of the country. New York, New Jersey and Connecticut bore the brunt of Covid-19 early on, while other parts of America are getting hit hard this summer.

Though there were some contentious moments, all in all, CNN’s Cuomo seemed OK with not “getting after it” with his brother, like he often does with his other guests.

“We’ve never really done it, but this was an unusual time,” CNN’s Cuomo said of the Covid-19 pandemic and how it impacted New York. “And they were unusual needs. You stepped up in an unusual way that really was created by a vacuum of power on the federal level.”

“But these unusual times have demonstrated some unusual characteristics in people. And of course I won’t always be able to keep having you on the show. It will never be seen as fair in people’s eyes, and we both get that, that’s OK, you have plenty of people to talk to.

I hope you are able to appreciate what you did in your state and what it means for the rest of the country now and what it will always mean to those who love and care about you the most,” Cuomo said to the governor. “I’m wowed by what you did, and more importantly, I’m wowed by how you did it. This was very hard. I know it’s not over. But obviously I love you as a brother, obviously I’ll never be objective, obviously I think you’re the best politician in the country. But I hope you feel good about what you did for your people because I know they appreciate it. Nothing’s perfect, you’ll have your critics. But I’ve never seen anything like what you did and that’s why I’m so happy to have had you on the show. And I hope you know that.”