NEXT:Scoreboard: Tuesday, August 1
PREVIOUS:Alisyn Camerota Explains Why She Has Been 'Blacklisted' By Pres. Trump 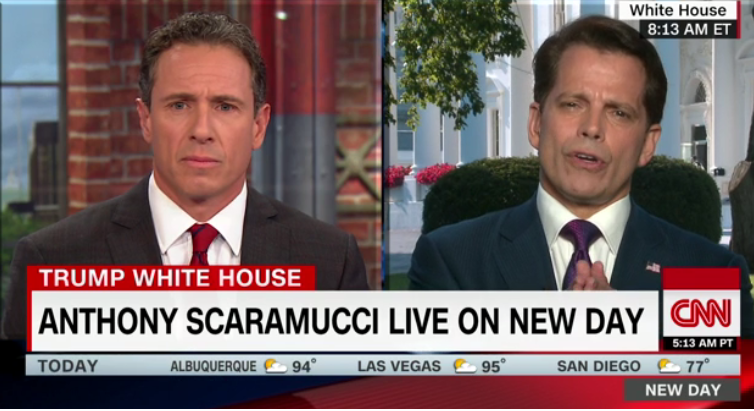 CNN New Day co-host Chris Cuomo has a byline on a significant news story that he broke on CNN last night during the 10 p.m. hour.

The news: that former White House communications director Anthony Scaramucci would be hosting an online event tomorrow and that event would be produced by former Fox News co-president and programming chief Bill Shine.

In the online version of the story, Cuomo and CNN Politics reporter Chelsea Tatum write, “this daytime event will give him the opportunity to reach and communicate with the President’s base.”

This comes one day after the New York Times reported that Shine was reportedly under consideration for a “behind-the-scenes role that took advantage of his skills producing and staging televised events,” and a week after The New Yorker’s Ryan Lizza reported that POTUS, FLOTUS, Shine, Scaramucci and current Fox Newsers and Trump supporters Sean Hannity and Kimberly Guilfoyle dined together at the White House. That leak led to the infamous conversation with Lizza that got Scaramucci fired.

Scaramucci told CNN that he only anticipated being in the position six to nine months, and claimed he was brought into the White House as a “special purpose vehicle” to disrupt the culture of leaking and counterproductive infighting.

The story also points out that Scaramucci considers his 10-day tenure in the White House “successful,” and believes he was “a target of both parties” and that his story “is being misconstrued.”

Prior to Scaramucci’s departure, he and Cuomo engaged in a memorable 30-minute back-and-forth on New Day:

UPDATE: Scaramucci decided to cancel the online event this afternoon.

No Press Event Tomorrow: Focusing on Family, My Work in The Private Sector. #MovingForward Stay Tuned!