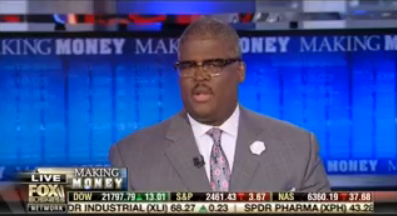 Fox Business host Charles Payne returned to the airwaves this past Friday after an internal investigation cleared him of sexual harassment allegations made against him by a female political analyst.

Payne, host of Making Money, was suspended for two months while the network investigated those allegations.

This suspension began on July 7 following Payne’s own admission of a three-year “romantic relationship” with said political analyst. In a statement to the National Enquirer, Payne apologized to his wife, kids and friends. The LA Times was first to report the suspension.

HuffPost first reported that the accuser was conservative political commentator Scottie Nell Hughes, who appeared frequently on Fox before moving to CNN during the 2016 presidential campaign. CNN signed her exclusively to a contributor contract in July 2016, but parted ways with her earlier this year.

Payne briefly addressed his absence at the beginning of the program before diving into Hurricane Irma news.

“As many of you know I have been on leave the past couple months. The situation has been reviewed and concluded. I look forward to resuming my role of helping you our investors with all the elements that impact our financial lives.”

Fox suspended Bolling on Aug. 5 following a HuffPost story which reported Bolling had texted, unsolicited, a photo of male private parts to multiple colleagues at Fox Business and one colleague at Fox News years earlier.