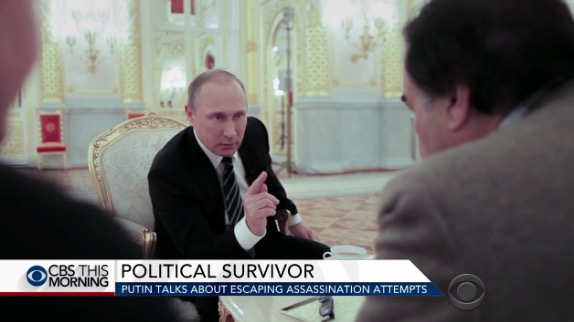 On Thursday, CBS This Morning aired a clip from an upcoming Showtime documentary about Vladimir Putin, just 24 hours before NBC’s Megyn Kelly sat down with the Russian leader for her own conversation, which will air on her new show tomorrow night.

For The Putin Interviews, a 4-part series debuting Monday, June 12 on Showtime, filmmaker Oliver Stone got access to both Putin’s professional and personal worlds. Stone interviewed the Russian leader more than a dozen times over two years, most recently in February.

“A lot of people would like to have two hours with Vladimir Putin at this moment,” said Charlie Rose coming out of the Showtime clip. Between the panel and the sit-down interview, Kelly will get about that amount of time with Putin. Here’s the clip from CBS This Morning:

Sunday’s 60 Minutes, which will go up against Kelly’s debut on NBC, also includes a Russia-focused story, a re-air of Lesley Stahl‘s March story with a Putin critic.

Here’s more from the Stone/Putin interview: