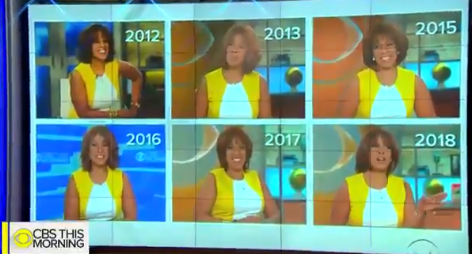 CBS This Morning had reason to celebrate this morning: 7 years on the air!

Gayle King rocked her signature yellow-colored dress for the occasion, and quipped: “Yellow’s my favorite color, except today I needed two Spanx. In 2012, I only needed one…I got some work to do, but I’m working on it, WW Weight Watchers; I will get it together this year.”

King also pointed out that tomorrow is also the 1-year anniversary of John Dickerson‘s arrival on the program. The Face the Nation moderator-turned-CTM-co-anchor joked that tomorrow, “is a double Spanx day for me, Gayle!”

CBS has yet to name a permanent replacement for CBS This Morning executive producer Ryan Kadro, who officially left the program last Friday. Of course, we’ll let you know when that changes.