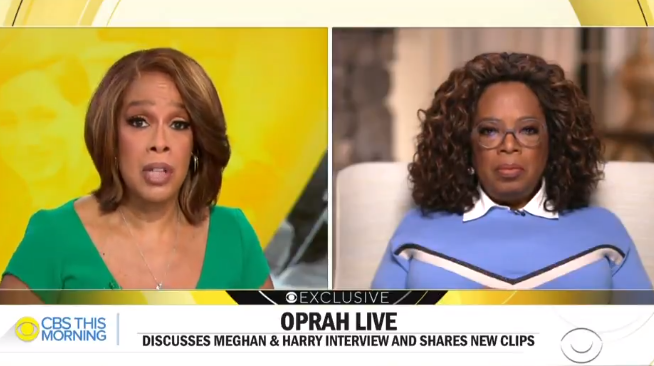 CBS This Morning was the top-rated morning show on Monday, March 8, 2021, beating GMA and Today in average total viewers and among adults 25-54.

It is the first time a CBS morning show has defeated both GMA and Today on a single day since Nielsen started keeping electronic records of TV viewing data 30 years ago.

CTM’s Gayle King, Anthony Mason and Tony Dokoupil anchored the March 8 broadcast, which featured an exclusive interview with Oprah Winfrey and never-before-seen clips from her interview with Meghan Markle, Duchess of Sussex, and Prince Harry.

The Monday broadcast of CTM delivered a whopping 4.8 million total viewers with 1.03 million of them in the 25-54 demo. The broadcast grew +74% in total viewers and +54% in adults 25-54, when compared to the prior Monday.

CBS This Morning’s coverage of Oprah with Meghan and Prince Harry has accumulated over 21 million social video views, according to the network.

In addition to the exclusive footage from Oprah’s Sunday night interview, Monday’s broadcast also featured an interview with Malala Yousafzai and Apple CEO Tim Cook, about a new partnership for the 23-year-old human rights activist to create film and TV projects for Apple TV+. Additionally, the broadcast included an interview with Stacey Abrams and actor/singer Janelle Monáe about their efforts to expand voting rights and fight systemic oppression.