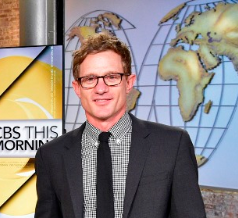 CBS This Morning executive producer Ryan Kadro is reportedly departing the network when his contract runs out at the end of the year.

Sources tell TVNewser that Kadro informed staff on Wednesday night that he would be, as usual, in the office for Thursday morning’s show and would address the Vulture report. That was indeed the case today.

The news of Kadro’s imminent departure came hours after the Washington Post reported that CBS settled a lawsuit with three former employees who sued the network for failing to act on alleged sexual harassment by former longtime CBS Newser and former CBS This Morning co-host Charlie Rose.

A CBS spokesperson said “The matter has been resolved.”

Kadro was named the lawsuit, with the accusers stating he was “fully aware” of Rose’s behavior, particularly his behavior towards Brooks Harris; yet Kadro allegedly chose to do nothing about it.

Kadro has helmed the CBS News morning cash cow –co-hosted by Norah O’Donnell, Gayle King, John Dickerson and Bianna Golodryga– since April 2016 , when original ep Chris Licht when down the street to ep The Late Show with Stephen Colbert. Kadro has been with CBS This Morning since its launch in 2012, working his way up the ranks to become co-executive producer in December 2015 before taking on the ep role 5 months later.

Despite consistently finishing No. 3 behind the more established Today and Good Morning America, CBS This Morning went on a solid ratings run in 2016 through a good chunk of 2017. Yet the ratings really started to taper off after the departure of Rose in Nov. 2017, and the program –which tries to differentiate itself from its broadcast competitors by offering two full hours of hard news– has never really recovered, and is currently posting the most significant year-over-year ratings losses of the big three morning shows.

With that in mind, it’s possible that Kadro’s exit has less to do with being named in the lawsuit and more to do with ratings.

CBS News president David Rhodes‘ contract runs out in February, so the network has some vital decisions to make in the coming months concerning its news division, which has had its fair share of issues as of late.