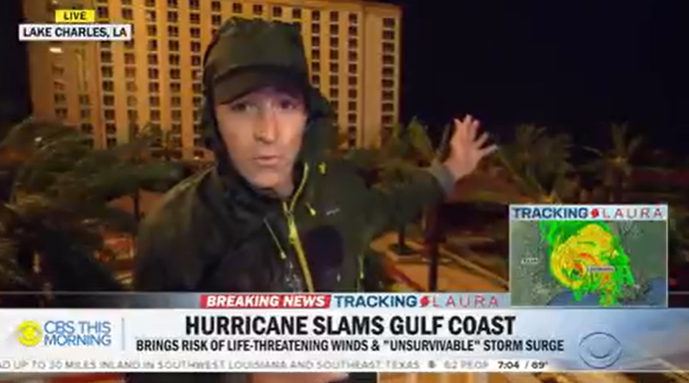 With 150 mph winds, Category 4 is officially the strongest hurricane to make landfall in Louisiana in 164 years. Considering the number of hurricanes the state has endured over the years, that’s saying something.

CBS This Morning co-anchor Tony Dokoupil is down on the Gulf Coast in Lake Charles, La., the city in the eye of Laura, and received a terrifying wake-up call this morning. He had to evacuate his hotel because, well, just click play:

I got a terrifying early wake up call for Hurricane Laura coverage this morning on ⁦@CBSThisMorning⁩. But what I’ll lose sleep over is if this is happening in a “hurricane proof” hotel in Lake Charles, what’s out there in the dark below? pic.twitter.com/RwdOxuphvA

Dokoupil is the only national morning newser co-hosting his broadcast from Lake Charles.

We’ve had an extremely long night in Lake Charles. we found out that the eye of this storm, the strongest storm to hit this area on record we believe, passed directly over the location where i am standing right now in Lake Charles, 30 miles inland. Let me tell you why that is particularly scary. We are about 30 minutes before sunrise here which means somewhere out in the darkness over my shoulder, there is still an as-yet un talled of damage in a surrounding area, and if the worst of the forecasts are accurate, an uncounted number of dead, as well. If it’s any indication of what we may see when the sun comes up, this hotel where we are, it’s a modern hotel, a new hotel, it is largely hurricane proof, and nevertheless, we have lost pieces of the roof.

If you look behind me, you can see the pool deck here is scrambled. The tops of trees are sheared off. 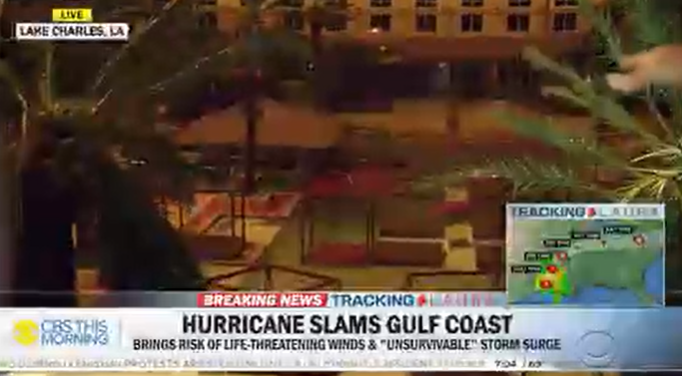 In my hotel room itself, in the middle of the night, I was awoken by a shattered pane of glass. I had to evacuate along with many workers here. Oil and refinery workers are sheltering here before checking on the plants while also worrying — this is the big thing — about their own homes. The job site is one thing, but then there’s the condition of their own property and their own loved ones.

As of Wednesday, The Weather Channel’s Reynolds Wolf was stationed in Beaumont, Texas, Paul Goodloe in Galveston, Texas, Chris Warren and Jen Farfagno in Houston and Felicia Combs in Kemah, Texas. Jim Cantore, Stephanie Abrams, Chris Bruin, Jordan Steele and Tevin Wooten were in the hot spot of Lake Charles. Mike Seidel was in Nacogdoches, Texas, and Justin Michaels in Shreveport, La.

An ugly stat from this morning:

2/Those strong winds will lead to more power outages. As of this tweet, there are over 500,000 customers without power between Louisiana and Texas. pic.twitter.com/EWCAHAwnOZ

Here’s the most recent update from the National Weather Service.