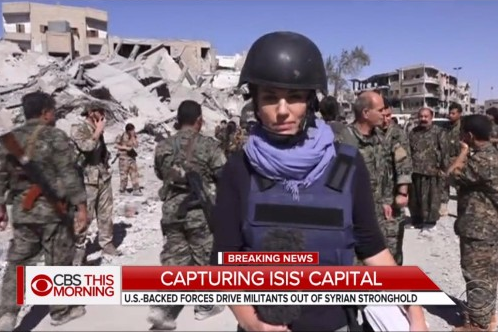 After a week and a half-long assignment reporting from Raqqa, Syria, CBS News foreign correspondent Holly Williams is finally on her way home.

Her job is done for now because the American-backed Syrian forces said yesterday that ISIS fighters had been completely defeated in the city of Raqqa, the terrorist organization’s de-facto capital for the past three years.

Williams, the only network correspondent reporting from the ground over the past week and a half, said she witnessed soldiers dancing and chanting just before the official fall of the ISIS stronghold.

As shown above, Williams reported Tuesday morning from al-Naim Circle, smack dab in the middle of Raqqa. ISIS turned it into a place for public executions, and then posted evidence of those murders on the internet as propaganda. She said it was a bizarre feeling to stand in that location. During the three-plus years that ISIS held Raqqa, she would almost certainly have been taken captive and killed there.

Williams told us in June that she and her crew were indeed almost killed reporting from Raqqa City. They were traveling with the allied Syrian Democratic Forces when all of a sudden they were spotted by ISIS snipers. A cameraman and producer ran for cover. They made it to safety, but were pinned down by snipers. Then came word that an ISIS suicide car bomber was just 400 yards away, but that turned out to be a false alarm. They eventually made their way into an armored car and got out.

“A big reason why I want to keep on coming back to Iraq and Syria is to tell stories of local people here who have suffered at the hands of ISIS,” Williams told us.

She indeed returned and that dedication paid off because she was present for what was an incredibly significant achievement in the fight against ISIS.