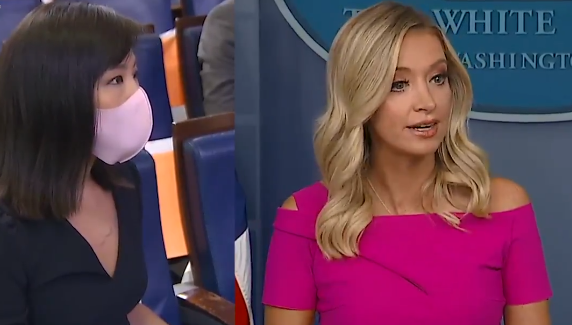 Perhaps Trump thought of it as a way of getting some laughs, but Jiang didn’t find it amusing, saying that it’s “extremely offensive” to Asian Americans.

Jiang asked, “Last July, President Trump declared himself the least racist person there is anywhere in the world. Why does he use racist phrases like ‘kung flu?’”

On March 17, Jiang revealed that a White House official called the coronavirus “kung flu” right to her face, but would not identify that person. Counselor to the president Kellyanne Conway demanded that Jiang share the name with the press pool. She didn’t believe anyone used that phrase at the time.

In response to Jiang’s question of why the president used the phrase, McEnany proceeded to blame mainstream media outlets for calling the coronavirus the “Chinese virus” in January and February. Not sure “Chinese virus” and “kung flu” are comparable phrases, but that’s an entirely different matter altogether.

“The president doesn’t,” responded McEnany. “The president points to the fact that the origin of the virus is China. It’s a fair thing to point out as China tried to ridiculously rewrite history, ridiculously blames the coronavirus on American soldiers. This is what China is trying to do.”

Jiang followed up, “That’s what he’s saying by using the racist phrase ‘kung flu?’ What does he have to say to Asian Americans who are deeply offended and worry his use will lead to further attacks of discrimination?”

“The media blames President Trump for using the terms ‘China virus’ and ‘Wuhan virus’ when they themselves have used these terms,” said McEnany.

“To be clear, are you saying the White House does not believe it’s racist?” asked Jiang.

“I think the media is trying to play games on the terminology of this virus,” McEnany answered.

McEnany doesn’t answer whether the White House believes the phrase is racist, and says “the media is trying to play games with the terminology” https://t.co/Nj065CIsxp pic.twitter.com/Ti6wzUVqJH

Jiang has had her fair share of dust-ups with the White House in recent months.

In May, she asked the president about his touting of U.S. coronavirus testing numbers. “Why does that matter?” Jiang asked. “Why is this a global competition to you if everyday Americans are still losing their lives and we’re still seeing more cases every day?”

Trump responded by saying, “They’re losing their lives everywhere in world. And maybe that’s a question you should ask China. Don’t ask me. Ask China that question, OK? When you ask them that question, you may get a very unusual answer.”

Sort of an awkward response, considering the question was being asked by a Chinese-American reporter.

After making the statement, Trump tried to move on, gesturing to another reporter and saying, “Yes, behind you, please.”

However, Jiang didn’t let up, asking, “Sir, why are you saying that to me, specifically, that I should ask China?”

“I’m not saying it specifically to anybody,” Trump said. “I’m saying it to anybody that would ask a nasty question like that.”

The previous month, she had asked Trump to clarify Jared Kushner‘s reference to the federal stockpile of PPE as “our stockpile” and something not for the states to use. Trump responded by saying, “You ought to be ashamed of yourself,” before accusing her of asking a question in a “nasty tone” and insisted that Kushner gave a “perfect answer.”

“The last thing I am worried about is whether he will lash out at me,” Jiang told TVNewser at the time. “What I do anticipate is how he may try to sidestep certain questions.”