NEXT:Report: NBCUniversal Chairman Jeff Shell 'Floated the Notion' of Elevating Nicolle Wallace to Role of Meet the Press Moderator
PREVIOUS:Friday, Aug. 7 Scoreboard: Tucker Carlson Tonight Is No. 1 in Total Viewers and Among Adults 25-54 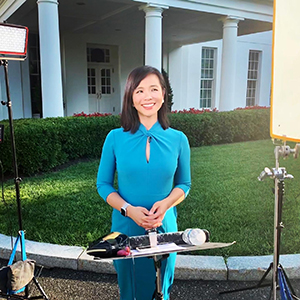 That’s why Jiang is being featured by our parent publication Adweek in its annual Young Influentials issue, out today.

“The impact of this year’s class of Young Influentials—leaders in media, marketing and tech who have yet to hit their 40s—can be felt from the way we shop for cool clothes, the shows we binge and the gin we drink to how we think about race,” writes Adweek features editor Kristina Feliciano.

Jiang, 37, has certainly left an impact on how the political media universe thinks about issues of race.

Jiang says the last thing she’s worried about is if Trump will lash out at her (as he did during an April briefing, berating her “nasty tone”), because her job is to hold him to account.

“Now more than ever, we have to be able to almost fact-check in real time and not allow these statements to just go unchecked,” Jiang told Adweek back in July.

Amid both the pandemic and the nationwide racial justice movement, “I feel more responsibility than ever with my job to make sure I’m getting as much information, the newest information, the best information to people, because so much is at stake,” says Jiang, adding, “Literally, lives are at stake.”

Here’s more of our July Q&A with Jiang:

TVNewser: Can you talk about the importance of speaking up and of holding this White House to account right now, especially knowing that you’re likely going to get attacked for it?

Jiang: I think regardless of what administration we’re covering, it’s our responsibility to hold those in power accountable and to ask questions. We’re sort of just the middleman between our viewers and those people who represent Americans, and especially for the administration when there are sometimes statements made that are divorced from reality. Now more than ever, we have to be able to almost back track in real time and not allow these statements to just go unchecked. That requires being completely plugged in all the time, and always keeping track of what they say and what statements they put out, and keeping track of inconsistencies because those require clarity.

I think speaking up is more about asking the right questions, and being able to recognize when something is not factual, to call them out on it. It’s not unusual for any administration to spin something the way they want it, but you really have to have your guard up all the time to prevent that from happening.

I want to circle back to the to the briefing from June. The “kung flu” briefing. That seemed personal for you and for many others. What type of feedback did you get after that briefing? Whether it be from colleagues or from friends because it seemed something bigger than simply “politics.”

Right, because there was no logical explanation to why the president was using this language from a presidential podium during a [Tulsa, Okla] rally. At any time, really. I thought it was really important to try to understand the motivation behind it, and that’s why I did press Kayleigh McEnany about it. It was really not just me, it was several of my colleagues, all following up on each other’s questions, which is why at the heart of it: Why is it appropriate for the President of the United States to use this language? The answer just did not sense, because the answer was, “He is simply trying to remind Americans of where the virus came from.” I wanted a logical walk-through of that argument because he term “kung flu” does not refer to a place, unlike Chinese virus, unlike Wuhan virus that the press secretary was using as examples and saying this is just another phrase to add to that list.

But again, “kung flu” is not like the other two, because it does not refer to a location. In the end, she still wasn’t able to offer any reason that the president was using this language. When you say that it became bigger than the moment, I think that this briefing in particular resonated with people because it wasn’t just me, a Chinese American reporter who was asking about it. It was a white reporter, an African American reporter, a female reporter.  I think that it just showed camaraderie and teamwork in demanding answers whenever there’s something that needs to be questioned.

I think from day one of covering President Trump, you have to always expect the unexpected. Even though the formats have changed, the suspense of not knowing what the day will bring remains the same. That is even true today, when the president has decided to hold Coronavirus briefings again. We usually don’t find out about them until the day of. Even though the official White House schedule is published the night before, oftentimes it will have nothing on it in terms of a briefing, and then the next day, the updated guidance will show that the president has decided to speak. You always have to be prepared. It speaks more to how each press secretary has handled the messaging differently.

I think the most jarring difference would be the most recent change. Stephanie Grisham had zero briefings, and Kayleigh [McEnany] has them quite often. Even before she officially came on board, our reporting indicated that that was going to be a major shift in the strategy. Grisham was the press secretary during impeachment, and I think the president felt like he was having to defend himself because the communications team wasn’t really out there driving home messages about his innocence. He wanted to be the messenger in chief, but he just didn’t have much support that you would expect as he went through something so big. I think with the new Chief of Staff [Mark Meadows], and with the new communications team, there was a decision to have that support with brand new faces.

What safety measures have the White House taken to make sure you are all taken care of and all safe?

As far as the White House goes, anytime we are going to be in the same room as the president, we are tested.

They [the White House] have peeled back some safety measures as of late. For example, we used to have to get a temperature screening before we stepped onto the ground. There was somebody in the medical unit asking if we had symptoms like a cough or a body ache or a fever. But that went away a few weeks ago. I think that they’re is relying on us with the support of our organizations and the Correspondents’ Association to comply with Washington D.C’s rules and regulations, which now require everybody to wear masks, for example.

As much as they have tried to sort of formulate these protocols, it’s our responsibility too to do the right thing and to know that when we are going to work, it’s not just about our safety, but 50 of our colleagues that we all, I think, have been respectful and doing everything we can to stay safe.

Also, just the amount of news and we’ve always said this covering this administration, but I think when you have to have the most significant stories of what I think will be my career unfolding at the same time— which is the pandemic and dealing with Covid-19, but also race relations for the country, and this uprising that we’re seeing— the two stories go hand in hand, they’re happening at the same time and they’re impacting people at home in a real tangible way that I think other stories do not. I feel more responsibility than ever with my job to make sure I’m getting as much information, the newest information, the best information to people, because so much is at stake. Literally, lives are at stake. I feel that every day. I lose sleep over it. I stay up thinking: “Am I asking the right questions?” “If I have the opportunity to see the president tomorrow?” “What am I going to ask him?” It is all-consuming. So I think in that way, it’s changed in that before I could unplug and socialize and unwind with my baby. Now, it’s almost impossible to do that because 24/7 I am thinking about the job. I’m dreaming about the job. I’m waking up thinking about my day ahead, and in that way it’s changed because because it has taken over my day.