NEXT:In Response to LeBron James, Laura Ingraham Says the U.S. Needs 'More Respect, Less Retribution'
PREVIOUS:Fox News Staffers Will Be Working From Home 'Through at Least the End of July' 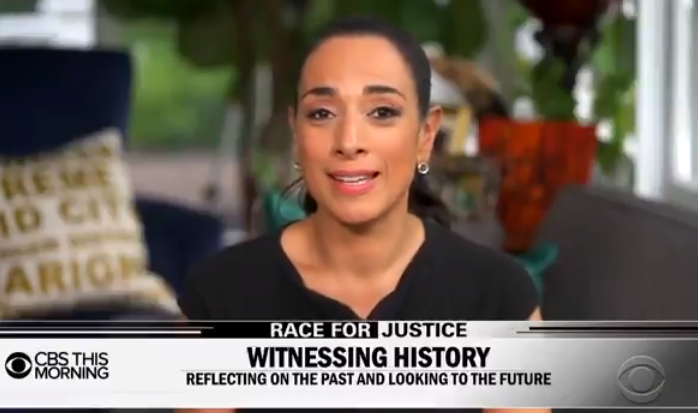 CBS This Morning: Saturday co-host and CBS News correspondent Michelle Miller delivered a very personal piece which aired on today’s broadcast of CBS This Morning, during which she shares her personal experience with racism.

Miller says she is “the product of an interracial union” and grew up in South Central L.A. in the 1970s. Her father celebrated the union, but she says her white mother and the white side of her family does not even acknowledge her to this day.

It’s something that informs her reporting.

“An early lesson for me came from my grandmother, right or wrong, she warned me to steer clear of police officers,” Miller said via voiceover, adding that her father became a doctor at age 22 and campaigned for the late Bobby Kennedy during his presidential run. Miller’s father was by RFK’s side when he was assassinated in Los Angeles in 1968.

Miller also spoke about how she was bused to schools in white suburbs, and later became a Los Angeles Times reporter covering the Rodney King riots. She would eventually move to New Orleans to become a reporter at WWL-TV, New Orleans’ CBS affiliate, at the same time when Marc Morial was mayor. Morial is now her husband, and presently the National Urban League president.

“Racism impacts me to this day,” Miller said. “It’s probably why I married a civil rights leader. A guy who’s out there fighting everyday to ensure intolerance is overcome.”

As we take a deeper look at racism and inequality, @CBSMMiller offers her reflections on why she believes this could be the moment that changes everything.#RaceForJustice pic.twitter.com/DS3bDA2dBo