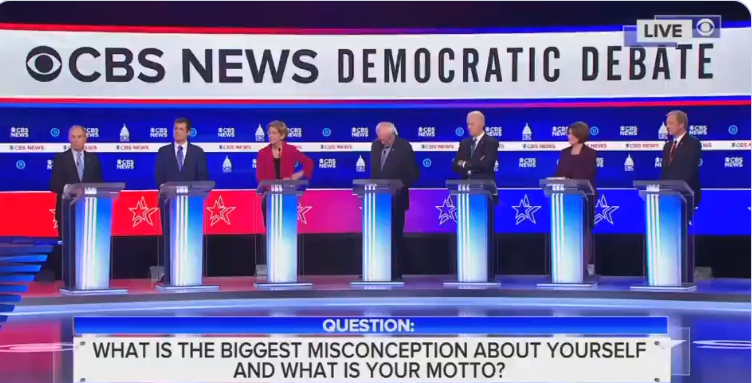 CBS News had a rough night. At least that’s what seems to be the pervading sentiment on Twitter.

The first hour of Tuesday night’s CBS Democratic primary debate from South Carolina seemed to address what transpired during the previous week’s debate, as opposed to the current issues at hand.

Frankly, much of it was tough to watch.

This was the first primary debate for more than one of the TV news journalists on the panel, and first for the network in this primary cycle.

The candidates constantly spoke over each other and complained, while the moderators struggled to keep the peace. It also took a while to get to the actual issues.

Where are the discussions about healthcare, the coronavirus, foreign policy, education, and how each candidate is best equipped to beat Trump in general? We’re nearly 30 minutes in and haven’t hit any of these topics as far as I can tell.

Many others in the news media seemed to agree.

CBS needs this break more than the candidates. That was a chaotic start. The moderators need to step in more forcefully and regain control in the next segment.

Debates are hard. TV news rivalries are hardcore. That said, debate pros at other TV networks are exchanging messages calling this a “disaster,” a “nightmare” and worse

Longing for a little more chill and a lot more thought.

Does CBS have a buzzer or something to organize this??? What’s going on?

These moderators need to get this under control. This is way worse than any bad day @TheView hot topics table. At least Whoopi has the bell… #DemDebate2020

More than 30 min in and I don’t think we’ve had a thoughtful discussion/debate on any substantive policy related issue.

Ugh this is getting out of control. #DemocraticDebate

Not impressed with the way this has started. Questions seem intended to provoke bickering rather than reveal anything of substance. https://t.co/5WBCsJ1Bqq

Why are the candidates bringing up coronavirus before the moderators

the moderators have lost complete control of this debate

New rule. If a candidate raises his or her hand, the moderator doesn’t call on them. It’s a Presidential debate. Not third grade math class. #DemDebate2020

Aaaand … sadly the ⁦@CBSNews⁩ moderators have surrendered control. The rule is now “talk loud and keep talking and you get the floor.” #demdebate pic.twitter.com/ayf2wrFNFM

I don’t know who’s winning this debate but the moderators are getting crushed.

The moderators have lost control.

When the candidates start talking over each other, the moderators should:
1) Bring the whole thing to a dead halt
2) Give them an order in which to speak (“you, then you senator, then you Mr. Mayor,” etc.)
Not complicated. You have to keep control.

CBS asking favorite motto?? Are you kidding? What a fiasco.

At one point, Face the Nation’s Margaret Brennan, the only professional moderator on the panel, stepped in to save the day.

Finally (!) Margaret Brennan asks the candidates to follow the rules of the debate.

Roughly 55 minutes in, the moderators started taking questions from Twitter users and we get the candidates talking about their ideas. Yes!

For instance, Sen. Klobuchar is asked about her plans to address affordable housing.

All the candidates, except Steyer, are speaking about the same amount. https://t.co/EGiH5hiDc0 pic.twitter.com/ZpnMVJZBJ6

But all in all, the reviews just weren’t great.

I can’t believe they just played Biden’s answer off like an Academy Awards speech. WTF was that?

Stop. Complaining. About. The. Moderators. (Unless you’re on Twitter then it’s OK)

Some good questions, but others — sugary drinks in NYC? — feel disconnected at a moment when Trump is purging the government of officials not deemed sufficiently loyal to him, amid serious concerns about the rule of law. Foreign policy? Climate crisis?

The CBS moderators are asking Bloomberg about his policy on sugary drinks and trans fats in New York.

They won’t ask him about spying on Muslims in New York.

Muslims have less value in the US media than sugary drinks and trans fats.#DemDebate

CBS TV Debate critique
1. Too many questioners
2. Too many gotcha questions
3. No control of the candidates yelling over each other
4. No need for a studio audience

The debate ended in an incredibly odd fashion. Gayle King and Norah O’Donnell appeared as though they were trying to end the debate before they realized they had one more segment.

My motto is don’t let CBS do a debate again.

CNN and Univision are up next, March 12 from Phoenix.