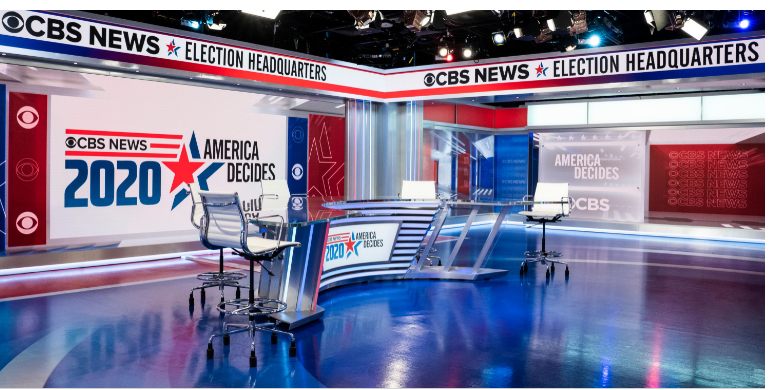 CBS News is in perhaps the most unique position of any major news network this year when it comes to election night. Not only is the network without a permanent Washington, D.C., bureau chief, but it has also moved its election night headquarters from its home base at the CBS Broadcast Center on West 57th Street in New York to ViacomCBS headquarters in Times Square.

Veteran TV news executive producer David Bohrman will be at the helm of CBS News 2020 election night coverage. CBS News hired Bohrman to work on political coverage during the election season, but he is not a full-time staffer.

Media industry staffers and insiders are familiar with Bohrman for his many years working across the TV news spectrum. He joined Current TV as president in 2011, and left in 2013, when the network was sold to Al Jazeera America. Prior to Current, he had a 12-year run at CNN (1999-2011), serving as svp of programming and Washington D.C. bureau chief. He produced CNN’s 2008 election night coverage, and was the man behind John King’s “Magic Wall” and those memorable election night holograms.

Before arriving at CNN in 1999, Bohrman called NBC News home from 1993-1997, where he produced most of the network’s special events, and was also one of the founders of MSNBC (he was a consultant for the network’s 2016 campaign coverage).

Bohrman spent the early part of his career at ABC News, where he was part of the launch team for Nightline.

We caught up with Bohrman to understand more about what CBS will bring to the table on Nov. 3, and how the pandemic is influencing how the night will be produced.

TVNewser: What can we expect from CBS News’ election night coverage that we didn’t see in 2016?

Bohrman: Election night coverage on CBS News will be about context and transparency. We are focused on telling the audience what we know, when we know it and how we know it at every turn. Election Night 2020 will be even more exciting for us because we are broadcasting for the first time from the CBS News Election Headquarters in Times Square, a new studio that we built just for this purpose, at the ViacomCBS building at 1515 Broadway. The Election Night set gives us a lot of space to work with and follow all Covid-19 protocols. It’s all the bells and whistles, including dozens of video walls, virtual mapping and augmented reality effects.

But of course, the real emphasis will be on the news and the reporting. Our entire team—on set and in the field—will be upfront about when we know something and have the data to back it up. It’s equally important we show and tell the audience why we may not know something just yet.

2020 is the perfect example of how layered election coverage is. Beyond the casting of a ballot, there will be several other developing stories. [CBS News chief Washington correspondent] Major Garrett’s reporting on exit polls, voting irregularities and voter integrity issues; [CBS News chief justice and homeland correspondent] Jeff Pegues on the use of misinformation aimed at influencing the electorate; and hearing what voters in all 50 states have to say. [CBS News contributor] Maria Elena Salinas will be reporting on diverse voting blocs. We’ll also report on how Covid-19 is impacting the election and how people are choosing to vote.

CBS News elections and surveys director Anthony Salvanto will be at the Decision Desk and guide viewers through the CBS News Election Night Tracker, which builds on the strengths of the Battleground Tracker. The Election Night Tracker will combine exit poll data and vote tallies with CBS News’ proprietary polling. By Election Day, the CBS News Battleground Tracker will have surveyed 100,000 people from all 50 states, and Anthony at the Decision Desk will show viewers how all the contests are shaping up.

We are prioritizing the health and safety of all employees. Everyone in the studio and in the control room are tested daily. Covid precautions help us bring more intentionality to every move and decision we make. It’s a conversation that goes beyond how many bodies can be in a room. It’s focused us even more on doing what we can to bring context in a timely way to folks watching, reading and listening that night.

This election cycle, we’ve emphasized reporting on the stories and voices of voters across the country. This election is happening state by state, and CBS News is drawing from correspondents and reporters around the country who will help viewers understand what’s happening in every state. We will have our team of anchors in the Times Square studio, led by [CBS Evening News anchor] Norah O’Donnell, and we will have contributors and correspondents in the Washington bureau and on remotes across America. We have foreign correspondents in position, too, to report on the global ramifications of the election.

CBS News president Susan Zirinsky has instructed us to plan for all scenarios and to be prepared to tell this story for however long it takes. That will include special coverage and reporting across all CBS News broadcasts on election night and beyond.

The CBS Evening News will broadcast live from the heart of Times Square leading up to Election Day. pic.twitter.com/fpjVIVAWvF