NEXT:Keith Morrison and Kristen Bell Are 'So Near And Yet So Far Away'
PREVIOUS:Scoreboard: Thursday, Jan. 10

CBS News is strengthening its political coverage in advance of the 2020 election, by expanding its political embed team, political beats, and enhancing in-depth nationwide reporting across all platforms, including the Local Matters series on CBSN.

“We are embracing political reporting now more than ever on every program and every platform,” CBS News vp and Washington bureau chief Chris Isham said in a statement. “Our commitment will be robust and it kicks off today with the announcement of the formation of our political embed unit – our boots on the ground for the 2019-2020 election cycle. This is the first step in positioning CBS News as a prime political destination for the 2020 election. This is a critical time in our nation’s politics and CBS News will be at the leading edge of campaign coverage.”

CBS News political director Caitlin Conant added: “With 2020 poised to be the most historic election of our lifetime, we were thrilled to see unprecedented interest in joining the political unit this cycle,””Our stellar team of political embeds and associate producers is second to none and will be at every event — in every state– giving our viewers an up-close look at the campaign trail along the way to the White House.”

The new political embed reporters and associate producers are listed below: 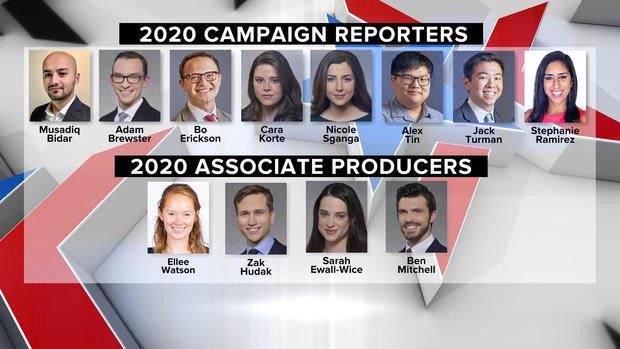 “Since transitioning from the control room last summer, Grace has embraced piece producing with her trademark fervor,” CTM senior producer Chloe Arensberg wrote in an internal memo to her colleagues. “From our lead pieces on Brett Kavanaugh, to the story of a triple amputee veteran’s stunning climb up Mt. Kilimanjaro, she has navigated breaking news and feature producing with her energy, grit and heart. She was also the force behind our ‘Coming Home series,’ profiling Marines returning from Afghanistan and, most recently, the homecoming of the USS Harry S. Truman ahead of the holidays.

Arensberg added: “Grace will work closely with our White House team, learning the ropes and staring down the challenges.  We know she will do her part to support her colleagues on the beat, while ensuring our coverage is the best it can be.  Grace’s editorial judgement and keen television sense has already made us better, and we look forward to seeing all she does in this new role.”