NEXT:Scoreboard: Thursday, Oct. 11
PREVIOUS:Lesley Stahl on Her 60 Minutes Interview with Trump: 'He Enjoyed the Sparring; He Said So, and I Could Tell He Enjoyed It' 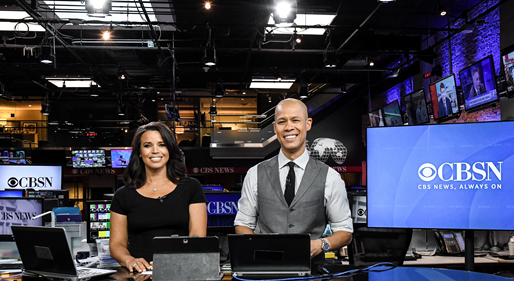 CBSN AM debuted on CBSN today, and will air on the service weekdays from 7-8 a.m. ET.

CBSN’s lead co-anchors Anne-Marie Green and Vladimir Duthiers, will deliver the top domestic and international stories of the moment, as well as detail what’s ahead in the news cycle that day. Green will anchor the full hour with Duthiers joining her at 7:30 a.m. ET.

If you have CBSN on your computer screen or on any sort of device at any point (or throughout) the day, chances are you’re used to seeing this duo. And in addition to seeing him anchor on CBSN, Duthiers is a frequent fill-in on CBS This Morning

“CBSN viewers have made it clear to us that they want more live coverage in the morning,” said Christy Tanner, evp and general manager of CBS News Digital. “‘CBSN AM’ will give our audience more depth and insight on the day’s biggest stories and feature more international coverage from our global team.”

CBSN says that it set new viewership records in September, which is now the top-ranked month in 2018 for total streams and the second-ranked month of all time, behind November 2016. Additionally, CBSN helped drive CBSNews.com to its top-ranked quarter to date for unique visitors and visits in the third quarter of 2018.