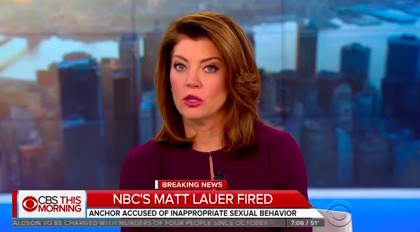 “I worked at nbc many years,” said CBS’s Norah O’Donnell after reporting the news on CBS This Morning that the Today show’s Matt Lauer had been fired. “And I know that Savannah is grappling with this and it’s difficult for them as well.”

“It’s unfortunate to look at, Norah, because I look at the picture and I have a sickening feeling of deja vu because we’re dealing with our own situation here,” added Gayle King.

King and O’Donnell’s morning co-host Charlie Rose was fired 8 days ago after several women came forward accusing him of sexual harassment over the years.

“I look at that picture and I have a sickening feeling of déjà vu. Certainly because we’re dealing with our own situation here. It does send a message that you’re not too big to fall.” — @GayleKing pic.twitter.com/oq9ktchy8r