NEXT:John Oliver Revisits Surreal Matt Lauer-Bill O'Reilly Interview During Episode About Workplace Harassment
PREVIOUS:Christiane Amanpour: 'My Job Is Not to Preach to the Choir. I Believe in Being Truthful, Not Neutral' 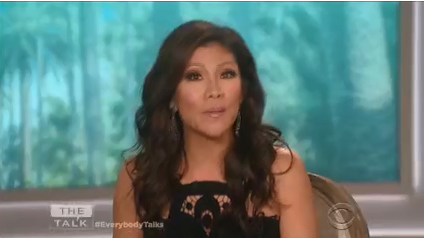 We don’t often write about the CBS daytime ensemble program, The Talk. But today isn’t an ordinary day.

At the top of today’s broadcast, The Talk co-host/moderator Julie Chen addressed the elephant in the room: allegations of sexual harassment against her husband, CBS Corp. chairman and CEO Les Moonves. The sexual harassment claims span decades, as detailed in Ronan Farrow‘s bombshell expose that published this past Friday in the New Yorker.

Chen, who also hosts CBS’s Big Brother and was formerly host of CBS’s The Early Show, got it out of the way at the top of the broadcast, and kept it succinct:

Some of you may be aware of what’s going on in my life the last couple of days. I issued the one and only statement I will make on this topic on Twitter. I will stand by that statement today, tomorrow, forever.

Here’s the statement she cited:

In his eight-month-long investigation, Farrow found six women who had professional interactions with the CBS chief, and who told him that, between the 1980s and late 2000s, Moonves sexually harassed them. Four of the women described forcible touching or kissing during business meetings, “in what they said appeared to be a practiced routine.” Two told him that the CBS chairman and CEO “physically intimidated them or threatened to derail their careers.” Farrow also wrote that all of them said that he became “cold or hostile” after they rejected his advances, and that they believed their careers suffered as a result.

The CBS board is reportedly meeting via conference call today to discuss the findings from the story, and what action, if any, will be taken against Moonves.

It appears the company is hiring an outside law firm to investigate the matter. Moonves will not suspended during said investigation. Additionally, no stockholder meeting until further notice.