NEXT:Sunday Show Ratings: Nov. 18
PREVIOUS:60 Minutes' Bill Whitaker: 'We Heard Today That Our Contracts and Our Money Trump Our Principles' 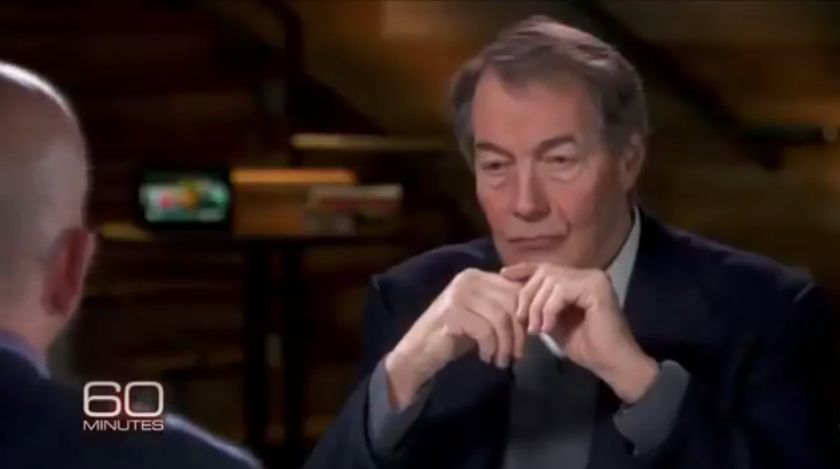 An atomic bomb was dropped on the world 0f television news one year ago today when CBS News fired Charlie Rose.

The move was made the day after the Washington Post’s Irin Carmon and Amy Brittain reported that eight women had accused Rose of sexual harassment at multiple networks, spanning decades.

The network announced Rose had been “suspended immediately while we look into this matter,” minutes after the story was published on Nov. 20, 2017.

The next day, at 12:22 p.m. ET, CBS News announced in a memo to staff (see below) that Rose had been fired. PBS, home of Rose’s eponymous interview program, followed suit not long after.

Here’s a look at the memo from CBS News president David Rhodes that went out to staffers on that day:

A short time ago we terminated Charlie Rose’s employment with CBS News, effective immediately. This followed the revelation yesterday of extremely disturbing and intolerable behavior said to have revolved around his PBS program.

Despite Charlie’s important journalistic contribution to our news division, there is absolutely nothing more important, in this or any organization, than ensuring a safe, professional workplace—a supportive environment where people feel they can do their best work. We need to be such a place.

I’ve often heard that things used to be different. And no one may be able to correct the past. But what may once have been accepted should not ever have been acceptable.

CBS News has reported on extraordinary revelations at other media companies this year and last. Our credibility in that reporting requires credibility managing basic standards of behavior. That is why we have taken these actions.

Let’s please remember our obligations to each other as colleagues. We will have human resources support today and every day, and we are organizing more personal and direct training which you will hear about from senior management shortly.

I’m deeply disappointed and angry that people were victimized—and that even people not connected with these events could see their hard work undermined. If all of us commit to the best behavior and the best work – that is what we can be known for.

CBS This Morning spent the first nine minutes of the Nov. 21 broadcast addressing the story of the man who was arguably the face of the show since it launched in 2012.

“Welcome to CBS This Morning. CBS News and PBS take Charlie Rose off the air,” said Norah O’Donnell at the start of the broadcast. It was also the lead of the show’s Eye Opener at 7 a.m. and the lead story of the broadcast, reported by Bianna Golodryga.

O’Donnell: This is a moment that demands a frank and honest assessment about where we stand and more generally the safety of women. Let me be very clear. There is no excuse for this alleged behavior.

Here is the statement I made at the top of the show on @CBSThisMorning: pic.twitter.com/uAO5yV3wV7

King: I really am still reeling. I got an hour and 42 minutes of sleep last night, both my son and my daughter called me. Oprah called me and said, ‘Are you okay?’ I am not okay. After reading that article in the Post, it was deeply disturbing, troubling and painful for me to read.

“I really am reeling. I got 1 hour & 42 minutes of sleep last night, both my son and my daughter called me. Oprah called me and said, are you okay? I am not okay. After reading that article in the Post, it was deeply disturbing, troubling and painful for me to read.” – @GayleKing pic.twitter.com/EQoEBHFkUr

In the 12 months since Rose’s firing, the show has managed to produce some pretty strong interviews with newsmakers. But let’s not mince words: CBS This Morning has struggled ratings-wise since Rose has left the program. Yes, all three of the morning shows are down year-over-year, but CTM –which prides itself on being more of a “hard news” program relative to its broadcast TV counterparts– has seen the most significant declines of the trio.

John Dickerson and Bianna Golodryga have joined Gayle and Norah as co-anchors on the show in the months since Rose’s departure, but based on recent ratings trends, it seems pretty clear he was the main attraction.

The Rose scandal was also the first of three related to allegations of sexual harassment and intimidation that CBS has faced in the 12 months since, including then-CBS Corp. chairman Les Moonves, as well as former CBS News chairman and more recently 60 Minutes executive producer Jeff Fager, both whom left the company in September.

Rose of course wasn’t the only morning show anchor to lose his job in light of sexual harassment allegations made against him. NBC fired longtime Today anchor Matt Lauer eight days later after a “detailed complaint” of inappropriate sexual behavior.”