NEXT:Tucker Carlson: 'I'm Headed to the Wilderness With My Son'
PREVIOUS:Fox News Launches Its Emmy Marketing Campaign for Chris Wallace 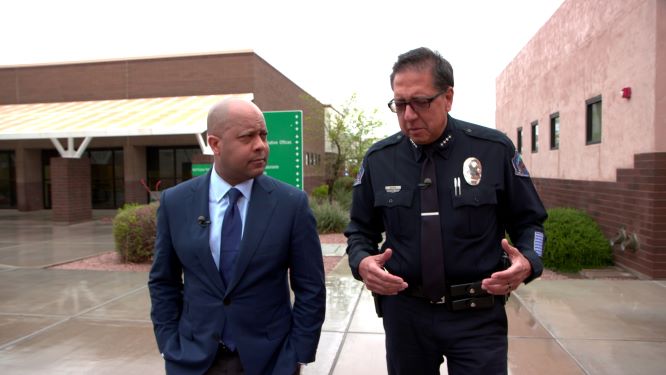 Tomorrow marks five years since Michael Brown was shot in Ferguson, Mo., and throughout this week, CBS News chief justice and homeland security correspondent Jeff Pegues has been taking CBS News viewers inside police departments across the country, hearing from cops about how their jobs have changed since the shooting, what (if any) efforts are being made to deal with racial bias, and the success of those efforts and beyond.

Pegues, along with CBS News senior producer Jonathan Blakely, spent a year on this investigation, titled Policing in America: Five Years after Ferguson.

We spoke with the veteran crime and justice correspondent on Wednesday about his findings, as well as the ways in which the recent surge in mass shootings and domestic terror attacks has changed how he approaches his vital beat.

It’s one that can really take a toll on a reporter and producer, mentally.

“When it comes to active shooter situations, the fact that we’re seeing them with more frequency – it’s hard to cover, and it’s hard to do so so often, not just for me, but for the people on my team,” Pegues told TVNewser. “I have producers who work with me, and every time one of these happens, it is distressing. It is difficult. At the same time you’re trying to get accurate information out there, you’re trying to work your sources. These are tough stories to tell.”

The project first aired Wednesday, on CBS This Morning and continued across CBS News platforms throughout the week.

To mark the five-year anniversary, Pegues will be reporting for The CBS Evening News with Norah O’Donnell tonight and tomorrow from Ferguson.

*This Q&A has been lightly edited and condensed for clarity.

TVNewser: Have you noticed any change in how television news networks have covered crime and justice since Ferguson?

Cell phone video changed the discussion around police-community relations. It also changed how police respond to incidents like that. Why? Because now when police go to these incidents, good or bad, they have people in the community who have their cell phones there recording these interactions. We are seeing these incidents happen more than we did pre-Ferguson. So, law enforcement has changed. We have changed, the way we cover these things has changed because you now have the video. You have video evidence, and if you just put the video on TV, that oftentimes that tells the whole story. Then, you have police trying to react to that.

Also, with the introduction of cell phone video, police departments know that they have to be more transparent because their worst fear is that they come out and say something, but there’s someone in the community’s cell phone video that tells a different story.

We now have more video evidence than we’ve ever had before and that has changed how we cover these stories.

Yours is one of the most difficult beats there is. Considering what seems to be increasing amount of violence on a national level, has the way you’ve approached your beat changed in any way?

The approach has evolved in that we have to use more discretion in how cover and tell these stories. There is this reaction in the community when you try to limit how many times you talk about who the killer was because in many of these instances, these killers want their name out there. They want to be known for these events.

So we have hard discussions about that…as the FBI pointed out the other night, there is this concern about “copycat.” These are emotional, tough, weighty issues that we have to grapple.

But on the other side – you cannot cover this up. The American public, the viewers that we serve have a right to know what is happening in these communities.

What surprised me is that the other day, after the [June 2019] Mesa shooting, I was in Chicago and I run into a store I had to get a suit and tie because I had to fly to New York to be on TV. The guy who was selling me the clothes asked, “what’s going on?” I was surprised he didn’t know what was going on.

We have to inform the public about these tragic stories because perhaps we can figure out a solution to prevent them from happening again.

Give us some background on Policing in America: Five Years after Ferguson. What attracted you to this project?

I have covered law enforcement for many years now. I’ve written books about the relationship between the black community and law enforcement. Jonathan Blakely, who is a supervising producer on this project – it was his idea to take a look at law enforcement across the country and the new training put in place since Ferguson to see if it was really working. He and I have worked together in the past, and he reached out to me as chief justice and homeland security correspondent for CBS News. It was just a good fit.

How about the overall production process? Reaching out to 155 police departments for this story is no small feat, particularly when you have these other breaking news stories to tackle.

For these last four weeks, I don’t think I’ve been in the same town for more than 48 hours. It has been really busy. I’ve tried to juggle my day job with these unfortunate active shooting incidents, but also bring this project that we’ve put our heart and soul to, to the finish line this week.

For CBS News, we covered Ferguson, Baltimore, and Staten Island [Eric Garner]. These are the kinds of stories and topics that we have been committed to. [CBS News president] Susan Zirinsky has shepherded this process forward. She has been there to support the process and this project because it’s important to the news division.

I have committed myself to seeing this through because it is something I am really invested in, given this is my beat, and given that this is a topic that is so important in so many communities across the country. That’s why we wanted to take a look at implicit bias training and whether it’s working. I think you’ll in the results – it was really telling what the officers told us, both in St. Louis and in Mesa, Arizona.

Anything you hear from the interviews that truly shocked you?

If you watch the piece, you can see my eyes widen when the two officers from Mesa, Arizona tell me that they thought that implicit bias training was “a dog and pony show,” essentially. They were really candid when that they said the trainers giving them the implicit bias courses had them sit there and watch the video, but before watching the video, say, “hey, watch this, but just do what you always do.” So, really discounting this new training that is being pushed into police departments across the country since Ferguson as an important tool for improving. That surprised me.

Then, you had the officer in St. Louis, who didn’t even remember taking implicit bias training. This was an African American officer. But he also was very candid in saying, “yeah, I think there are white supremacists on this police force.” In my view, that’s the tip of the iceberg of what we found out. I was certainly surprised by those responses because I can tell you that those are not the same that the police chief told us. They were not as candid. To hear it from rank and file officers – I think that’s why these reports stand out.

You spent nearly a decade at WABC here in New York. Do you miss your local news days? How has that experience shaped you as a reporter today?

Working your way up through local news – I’ve been in so many towns and cities, big and small in the Midwest, in the south, all along the East Coast. I feel like I have a great sense of who the American people are because I’ve been different types of neighborhoods.

Local news, in my view, how I came up the way that I did – I think it gives you an edge. I feel comfortable going into any community because that’s what I had to do as a local news reporter, and certainly in New York City.

The diversity of New York City puts you in a position as a reporter who you have to know how to blend into neighborhoods in Queens, Brooklyn, the Bronx, the Upper West Side of Manhattan, the Upper East Side. You go on a different block and you see a different culture. That’s what so beautiful about New York City. I think it makes you a better reporter.

So that’s what local news has done for me, now, as the chief justice and homeland security correspondent. When I talk about these communities, undoubtedly I’ve been to many of them, thanks to local news.