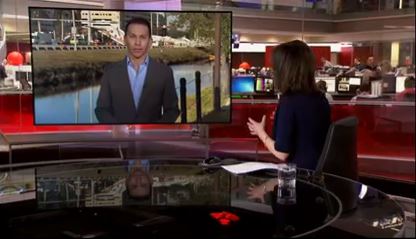 “The new arrangement in Johannesburg will bring together the CBS News team and BBC News personnel under one roof, enabling greater collaboration in our newsgathering throughout the continent,” said CBS News evp Ingrid Ciprian-Matthews.

Ciprian-Matthews said the opening of the bureau is just the next step in forging a closer working relationship with the BBC, a global newsgathering behemoth.

“Throughout Europe, we have bolstered coverage of terrorist attacks, jointly covering the Barcelona and London attacks. During the fall of Raqqa our teams worked very closely as they have done throughout the coverage of the Syrian civil war. And, as the Royal Wedding approaches, we expect our BBC News partnership will continue to be a significant resource to us,” she said.

As for the BBC, they get access to CBS News resources across the U.S., evidenced most recently as CBS’s Manuel Bojorquez reported from the scene of the deadly bridge collapse in Miami-Dade County for the BBC’s national newscast.

“Our colleagues at the BBC have told us how much they value our extensive coverage from across the U.S. on all the big stories and also the close editorial and production links being established between our teams,” said Ciprian-Matthews.