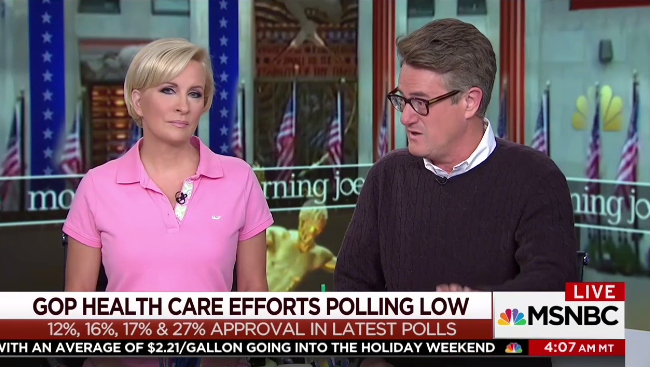 Well, it’s not health care, or Russia, or the travel ban that is the top story on most cable news shows today. It’s the media. Specifically, these tweets from Pres. Trump about MSNBC’s Mika Brzezinksi and Joe Scarborough.

“Normally we wouldn’t get into this,” said MSNBC’s Andrea Mitchell on her show today, “but it has been commented on by all of the senators, republican and democratic, anyone who has been asked about it.”

Sarah Huckabee Sanders reacted on Fox News in the 10 a.m hour. Later, on Outnumbered, her father, former Gov. Mike Huckabee said, “Would I have said what he said in the tweets? No. But let’s be a little fair here. He was called on television by Morning Joe a schmuck, a goon, a thug, deranged, incapable of holding the office, those are some of the nicer things that he was called.”

“I’m not a fan of theirs,” said Meghan McCain, adding, “I was grossed out because I think talking about women in cosmetic surgery in general, is just, stay away from it, don’t do it. I do believe this is beneath the dignity of the White House.”

CNN has given the story the most coverage, with multiple mentions and discussions in the 9 a.m., 10 a.m., 11 a.m. and Noon hours, including this reaction from democratic strategist and CNN analyst Keith Boykin: