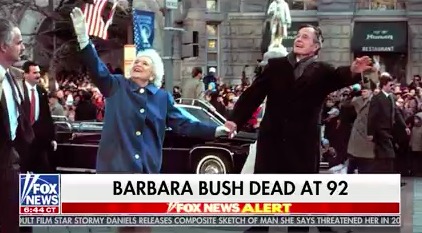 FBN’s Maria Bartiromo has a previously-scheduled interview with George W. and Laura Bush tomorrow morning from Dallas. Bartiromo is moderating a panel at the Forum on Leadership event at the George W. Bush Presidential Center later tomorrow.

W’s statement: “… our souls are settled because we know hers was. Barbara Bush was a fabulous First Lady and a woman unlike any other who brought levity, love, and literacy to millions.”

BREAKING: Former First Lady Barbara Bush has passed away at 92, according to a Bush family spokesperson. pic.twitter.com/zemluFwIMV

Barbara Bush was a remarkable woman. She had grit & grace, brains & beauty. She was fierce & feisty in support of her family & friends, her country & her causes. She showed us what an honest, vibrant, full life looks like. Hillary and I mourn her passing and bless her memory.