NEXT:Meghan McCain Leaving Fox News
PREVIOUS:White House Stands By Criticism of Jemele Hill and ESPN: 'They Should Hold Anchors to a Fair And Consistent Standard' 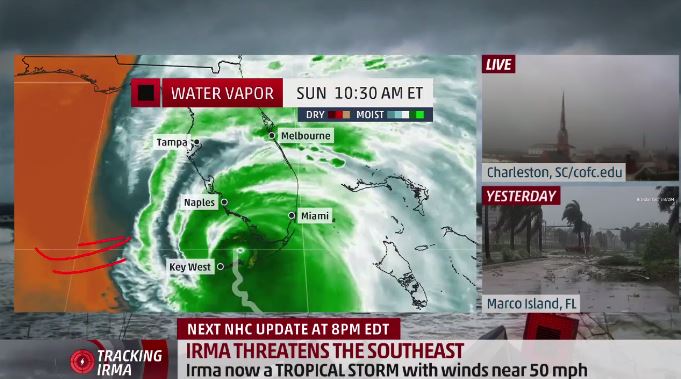 America’s eyes were glued to the news this past week, even more than usual, as the cable news networks provided extensive coverage of Hurricane Irma.

The four most-watched basic cable networks of the week in total day were all of the cable news variety: The Weather Channel, Fox News, CNN and MSNBC.

Four of the top five in prime time were cable news nets, with ESPN wedging itself in between Fox News and The Weather Channel at No. 2.

Fox News earned the distinction of being “the most-watched prime time basic cable network” for the 16th consecutive week, per Nielsen data. The network was +10 percent in total prime time viewers versus the comparable week in 2016.

In total day, however, Fox News dropped to No. 2, as The Weather Channel thrived with its wall-to-wall coverage of Irma and finished at the top of the heap. Fox News had been the most-watched basic cable network in total day for a whopping 35 consecutive weeks before TWC broke the streak.

Here are the five most-watched basic cable networks during the week of Sept. 4: