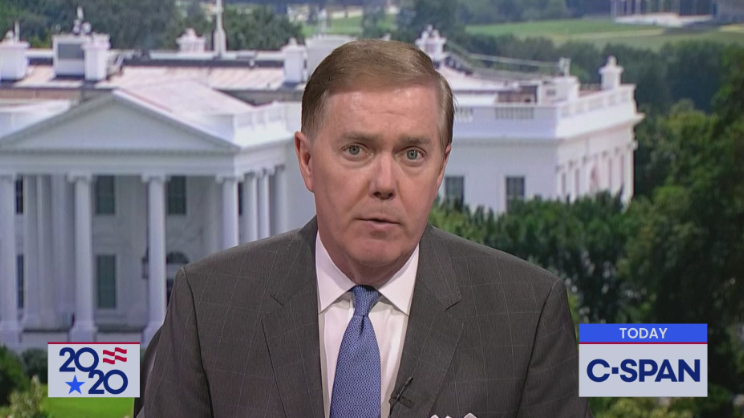 C-SPAN senior executive producer, political editor and host of Washington Journal Steve Scully has been suspended by the cable channel after he admitted to lying about having his Twitter feed hacked into last week.

Ironically, Scully, a longtime TV newser and face of C-SPAN for 30 years, was supposed to moderate what was going to be the second presidential debate of the 2020 campaign between President Trump and Joe Biden tonight. The debate was eventually scrapped after Potus contracted the coronavirus and then declined to participate in a virtual debate.

A week ago, after Trump had publicly accused Scully of being a “never Trumper,” Scully tweeted “@Scaramucci should I respond to Trump.”

The message was meant for Anthony Scaramucci, Trump’s one-time communications director who has since become a vehement critic of the president.

Scully explained the thinking behind his tweet to Scaramucci, saying, via statement: “For several weeks, I was subjected to relentless criticism on social media and in conservative news outlets regarding my role as moderator for the second presidential debate, including attacks aimed directly at my family. This culminated on Thursday, October 8th when I heard President Trump go on national television twice and falsely attack me by name. Out of frustration, I sent a brief tweet addressed to Anthony Scaramucci. The next morning when I saw that this tweet had created a new controversy, I falsely claimed that my Twitter account had been hacked. These were both errors in judgement for which I am totally responsible. I apologize.”

Scully added that his actions had “let down a lot of people, including my colleagues at C-SPAN, where I have worked for the past 30 years, professional colleagues in the media, and the team at the Commission on Presidential Debates.”

C-SPAN said Scully admitted to lying about the hack on Wednesday. He has been suspended and it’s not clear from the statement below as to when he’ll return; but he will indeed return.

“By not being immediately forthcoming to C-SPAN and the Commission about his tweet, he understands that he made a serious mistake,” C-SPAN said in a statement of its own. “We were very saddened by this news and do not condone his actions. During his 30 years at C-SPAN, Steve consistently demonstrated his fairness and professionalism as a journalist. He has built a reservoir of goodwill among those he has interviewed, fellow journalists, our viewers, and with us. Starting immediately, we have placed Steve on administrative leave. After some distance from this episode, we believe in his ability to continue to contribute to C-SPAN.”

Scully, with whom we spoke in August right before the conventions, has covered presidential campaigns since 1988. After graduation, he went to work at WHEC-TV in Rochester, N.Y., as a reporter. Two years later, he joined C-SPAN and has coordinated the cable channel’s campaign programming since 1991.

He will not be coordinating election night programming this time around.