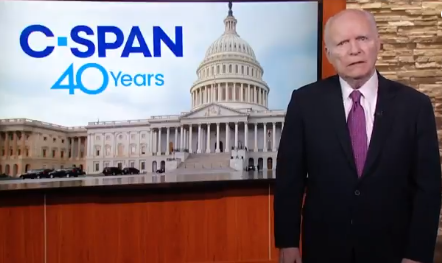 The cable channel, which recently celebrated the big 4-0, is seeing its founder and chairman Brian Lamb retire.

On May 19, Lamb will also finish his Sunday night interview program that he’s been hosting for 30 years, told the Wall Street Journal‘s Kyle Peterson.

His last interview will be with historian David McCullough.

Thanks to C-SPAN’s live gave to gavel coverage over the the last 40 years, Americans have been able to see directly for themselves and make up their own minds about many momentous political and policy debates.

However, Lamb says there’s still a lot behind the scenes that Americans aren’t aware of, but should be.

“Lying is the word that I would use to describe this town,” said Lamb. “I don’t know if it will ever stop. It’s gotten worse rather than getting better and both sides do it. You’ve got to listen very carefully to what they’re saying.

C-SPAN Founder and Chairman Brian Lamb offers his thanks to our viewers, the U.S. Congress, and the cable television industry as we celebrate 40 years of allowing viewers to make up their own minds. #cspan40 pic.twitter.com/aw3JAQ5MaL